Those who live in my neck of the woods and are familiar with the main north-south commute from Saratoga to Schenectady may know of the old garage on route 50 which is surrounded by large abstract sculptures and painted over in bizarre icons. I myself had remembered passing this strange landmark upon occasion over the past two decades, and in the past few years as I began to pass it even more frequently (as Elihu and his father went back and forth to the train station) I’d begun to wonder more deeply about the place. I’d stopped a few times to take photographs, and as I examined the whole menagerie more closely I became increasingly  intrigued with the place, the paintings, the sculptures… Who’d made them? Why were they all just sitting there? And where was this person now? What were the stories behind the pieces? I’d loved this art for years, and now with the place for sale by owner, they sat, rusting, languishing. At first it was just a small hunch, a wisp of an idea… could I possibly own one?  There was one piece in particular that called to me… a lovely bird… and I knew exactly where it would go in my garden… Then months would pass, nothing would change. There they still sat. My vision remained, too. I loved that bird. I could find a way to take it home with me, right? Why not? But how? I can’t just take em. That’s not right. Gotta find out who owns them and go from there. And money, oh, yeah. I’ll have to set some aside. Gotta make a plan here…

About a year ago I finally took down the number on the sign and called. After a bit of Googling to equip myself with some preliminary backstory on the place, I called the family who was selling the property and spoke to the artist’s brother. The artist himself was named Allan – known better to friends as ‘Ace’ – and had made the sculptures several decades back. Ace had been in Viet Nam, had returned a changed man, had discovered relief in the bottle, in the Bible, and finally in his artistic creations. At one time in his life he lived all across the country, hitching rides and taking odd jobs where he could. But finally he ended up here, in his grandfather’s old auto shop, using bits and pieces from the junk pile and welding them into large, free-standing organic shapes. He was still living, his brother told me (to my great relief!) and in fact he was in a nursing home not terribly far from my home. Within a day of that call I was off to meet Ace.

Since that first meeting, I’ve stopped in a handful of times to visit. Although I understand he has his off days, whenever I’ve seen him he’s been pretty together. Recalling stories, tidbits of this, tidbits of that. He’d had a stroke about eight years ago, and that’s when he moved out of the property. His brother’s been taking care of the place ever since. When I told his brother I’d like to acquire some of Ace’s pieces – in particular that delicate bird which had so captivated me – he expressly told me that it was business between me and his brother alone. Told me to take it up with Ace. As this man was a tremendous fan of Ayn Rand and put great value on respecting the rights of the individual (and would therefore not intercede in the sale of something that was not his to sell), I realized my hoped-for pieces were safe for now. No one had expressed interest before, and I had a direct line to the artist. Perfect!

For my 50th birthday I bought myself two pieces of sculpture. I visited Ace, wrote up a little contract, put the money in his account at the home, kissed him in thanks and left. Life got busy, and while I’d intended to pick them up sooner, a week had passed and they still sat waiting for me. One morning the phone rang. It was Ace’s brother. He had my ‘bird’. My heart pounded with the thrill of knowing it would soon be here, in its new home. We made plans for the next day. Elihu and I met the brother at the garage, but when we pulled in I felt something might not be right. There were only two pieces left of the dozen or more that had sat there for years… and none my bird. These pieces had sat virtually ignored for decades, and now they were nearly all gone? Just like that??  Ace and I had agreed on two pieces, so Elihu and I looked over the mere three remaining and had just chosen the small one (which he titled “Mayfly”) when Bill pulled up and told me the bird was in the locked garage. I held my breath as he opened the door… and then – I’m ashamed to say I reacted so strongly – when an entirely different bird appeared my heart sank and my body went cold. Oh no… I’d waited. And I’d trusted this man. Thought he had let the deal be mine and Ace’s alone. “That’s not the one” I said, trying not to cry. Really. Cry? Oh, but I’d had this vision for so many months now… So much anticipation. This piece really had that ‘look’; it was Ace’s for sure – and it was a nice piece, just not the one I’d held in my mind’s eye for so long. Fifty year old women don’t cry about things like this, I’m thinking to myself. Suck it up. You’re lucky you got anything at all. But still. This feels wrong. He sold my bird to someone else – knowing full well which one it was I wanted! And you know what else? Although Ace and I had agreed upon two pieces of sculpture for the price, his brother told me that was unacceptable. !! The small piece already in our van would cost extra. Extra? I thought this was between Ace and me! I hadn’t any extra with me – Elihu and I had hoped to have a celebratory lunch out. (Maybe I didn’t need extra money for eating out – there was less to celebrate than I’d thought.) I made him an offer of the remaining cash I had on me, and as I went to find it in my purse he agreed to take ten less. So at least we could swing lunch. Thanks. Sigh.

Always one to try and preserve relationships as best I can, I smiled my way through some small talk as we looked around Ace’s old shop together. We even had some friends in common – the folks at Elihu Farm! But that didn’t help us here and now. As Elihu admired the stuff all around, and even as the brother gave us a couple of Ace’s things as mementos, a sick feeling still hung in my gut. I was stunned and in disbelief. Something so simple. A man proclaims his principals, proselytizes about them to me (an earlier visit had him and his wife urgently encouraging me to seriously begin to study Ayn Rand and learn about the importance of individuals acting on their own behalf), then doesn’t even live by them in the end. Ugh. My tummy wasn’t much better even by the time we got home.

I’d thought some time, some perspective might lighten my heart. And yes, it has. A little. And yes, this still might be a ‘best mistake ever’. Cuz I’ve told myself that I’m just going to have to learn how to weld a bird of a similar shape on my friggin own if I can’t have Ace’s bird in my garden. We’re a bird family, after all! There is a woman not far from here who is a sculptor of large pieces. Already considering calling her up. Can one just up and learn to weld? Really? Secretly, this missing bird has got me going… been collecting interesting looking pieces of metal from abandoned farms, from trash piles in the woods… all with the hope of doing what Ace has… Can I? Not convinced I’ll take it that far. I just miss that little shape, that gentle turn of iron… and still wish she were here with us.

For now I’m going to enjoy the pieces we have. They animate our little perennial forest garden so delightfully. They just add a certain charm, humor and extra presence which seems to bring the space alive. Since I’ve lived here I’ve secretly held a vision of this property with footpaths running throughout, a flowing creek under the bridge, terraced land held back with lovely stone walls, perennials at every turn, trees that will one day make a glorious canopy overhead, walls of lilacs that will burst each spring…. 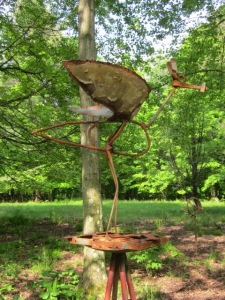 Here is the ‘wrong’ bird. He’s growing on me, though.

(Maximus hissed at it like crazy when I took it out of the van and stood it up. !) 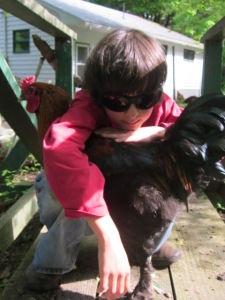 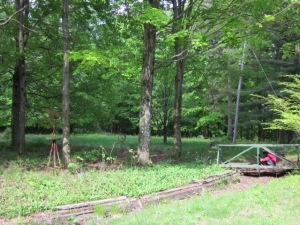 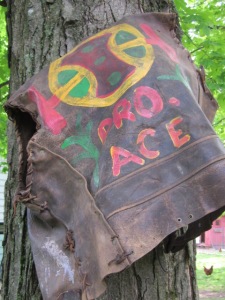 A handmade leather vest Ace made for himself.

A part of this guy will always live on here at the Hillhouse.