Over this past weekend the sixth graders held an event they call ‘The Angel Room’, a day in which they shepherd the Waldorf wee ones on a quest to purchase handmade gifts for their family members. The classroom is transformed into a magical winterscape, with the merchandise all laid out in the most enticing way… It tied in wonderfully with the sixth grade curriculum; Elihu’s class is currently studying economics, and this became a real-life exercise in learning how to conduct transactions, deduct expenses and realize a profit. (The proceeds from the sale go into the class fund for trips and special expenses.)

While the tiny children waited to be greeted and escorted by a sixth grade angel through the transformed classroom, they and their families spent some time in the large eurythmy room, enjoying music, puppet shows and home-baked treats. The two hours went by fast, and after so much setting up and tearing down, it’s hard to imagine it ever happened at all, because by Sunday afternoon the classroom looked as if nothing out of the ordinary had gone on. (The Waldorf school sets a great example of living life with a certain Zen-like attitude; routinely events like this are thoughtfully and lovingly prepared for – and then promptly packed away and cleaned up. The process becomes as much a reward as the goal activity itself.) The Angel Room is a relatively new tradition at the school, but I’m sure it will last for years. It brought out the very best in Elihu and his classmates and it was incredibly moving to watch their tenderness as they guided the little ones.

The day before the Angel Room was a wet and wintry day, and since Elihu was caught up with homework, and there was little to do inside, we decided to pack up his rc helicopters and head out to the mall to do a little flying. In the past we’ve used the generously sized open area outside the mall gym. With a good thirty foot ceiling and off to the side of the mall’s main corridor, the space is perfect for flying. Until one gets shut down by the mall cops, that is. I can’t help but wonder if the bored sales clerks in the neighboring jewelry store narked on us. It was quite a let down – Elihu had been waiting to practice flying his Blade heli for a while now with no luck (it requires some serious space). He took it well, and as a small consolation I arranged for him to fly some helis at one of the free-standing kiosks. Until another mall manager found him and asked him to stop. I racked my brain, where could we go now? Indoor ice rinks, nope. The Y? No. The auditorium at Skidmore College? No, probably not. And then it hit me – Lowe’s! With ginormously (that’s a sixth grade-sanctioned adjective) high ceilings and lots of airspace, it was certainly worth trying.

In minutes we were enjoying the lumber section of the home improvement store all to ourselves. Thankfully the inclement weather had kept builders away. The employees weren’t busy either, and they enjoyed watching Elihu fly and then chatting with him afterwards. One by one, Elihu exhausted the charge in each machine. We’ve never had such a golden opportunity before. It’s a great new resource and we’re thrilled to have discovered it. Maybe a little angel gave us the inspiration. One never knows. 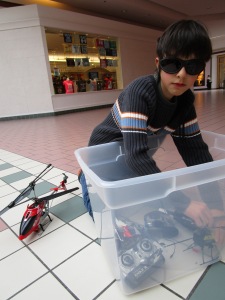 Elihu enjoys a long rc flight and tells us a little about the particulars of the craft. 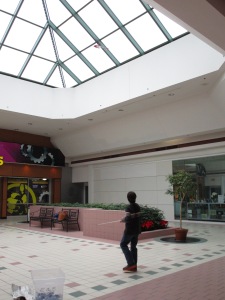 He had a pretty good run before the mall cops shut him down.

Elihu got to demo the quadcopter at the kiosk. Again, until the cops caught up with him.

The sixth grade classroom before its transformation.

The short hallway into the room, before… 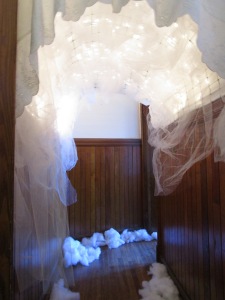 Everything looks so inviting. 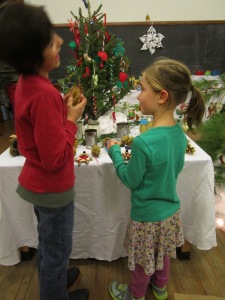 Elihu enjoys a laugh with his classmate’s little sister Cara. 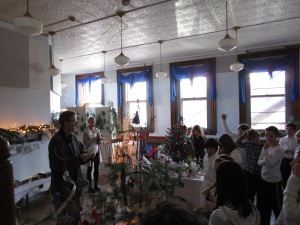 Mr. Esty goes over the duties of the sixth grade angels. 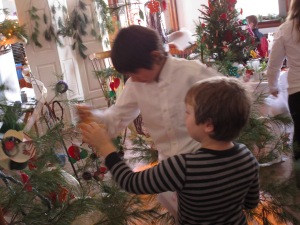 Elihu takes his first charge through the room.

Elihu, showing a young one around the room of gifts.

Adam and Sawyer are the right guys for this job! 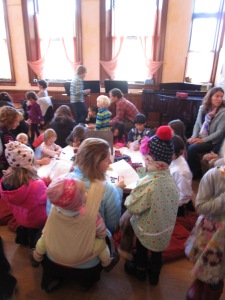 There’s a lot going on in the eurythmy room as folks wait for their turn.

Angel Norah helps the little ones color their gift bags. 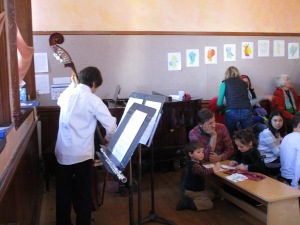 Elihu was excited to play a couple of solo pieces.

A couple of the sixth grade girls did a reading of their work – it was very funny!

The angels take a little break and watch the show. 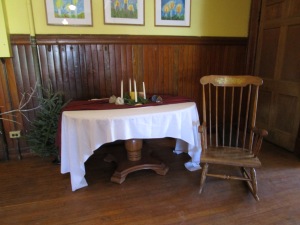 Before long, all was quiet and things were made ready for school to begin again the next morning. Everyone pitched in and made the job go much faster than I would have expected. Can you believe this is what the main hallway of the school looks like? We both feel so lucky to be a part of this oasis in such a chaotic, fast-paced, over-stimulated world. We thank our angels we found this place.