My name is Elizabeth Conant, and I began writing these posts as a middle-aged, single mom to a precocious, funny seven year old boy named Elihu.

In the life that late I led, I was married to a guitar player. I worked as a musician, singer and teacher. I was lucky to travel a fair amount and experienced a mixed bag of life adventures. My husband and I lived in Chicago for many years, and we enjoyed performing together for over two decades.

After our chapter in Chicago’s near north suburbs,  we moved to the cornfields of DeKalb, Illinois, where we bought and ran a small nightclub for a couple of years. We had a very young child and had planned for another. A move to this town, in which my husband taught part-time, seemed the perfect next step in our lives.

It was there that my husband told me that he had a girlfriend in town, and that they’d already been together for a few years… and that she was pregnant. She was quite a bit younger than us, and I knew her too, as she’d been a waitress at our cafe on occasion. By this time I had also learned my ex had still another child; a daughter with a woman our own age whom my ex had known years before. It was a lot for me to process all at once.

My husband continued to live at home with us during the pregnancy; he told me that he was confused and unsure of what he wanted. Even after months of a surreal, dream-like existence it was nonetheless the most stunning, heart-rending thing to hear him say he had decided to start over with his new family. Just like that, my partner of 22 years had ended my role in his life. I asked him repeatedly how he envisioned the new logistics, but he just kept putting me off, saying that everything would sort itself out in time. After months of self-deception, I could no longer deny that something had to be done; the situation was not going to solve itself. So I began to make a plan.

Here it was; the big shift. I could no longer pretend that things might be going back to life as I’d previously known it. Our son wouldn’t grow up with his father living at home, we would no longer share all those precious milestones of our son’s childhood as husband and wife… and just where exactly our home was to be now, that too was up for grabs. I would be a single mother. And now, divorce would no longer be someone else’s sad story –  it would be mine too.

A fresh start was the only option for my mental health and clarity. I piloted my way through the following weeks in a daze, making plans from my head, while my heart dragged behind, wondering if there wasn’t some way to repair things, to save the marriage… Finally, after months of logistic feats and careful planning, while my husband was on the road with his girlfriend and newborn baby, I held a house sale, packed up what was left and moved cross-country to live next door to my parents in rural upstate New York.

The height of our drama is now long past, and my son, thankfully, remembers no other life than belonging to two separate households (he was 5 when we left Illinois and his father remained in our old home). He hasn’t been greatly traumatized by the change in plans; the life he has suits him fine and for the most part he’s a happy kid. Instead, I’m the one who still has to work on it. I’m grateful for this new, unexpected life, but I still do miss ‘what might have been’ more than I should. But truthfully, things are so very much better these days. Time has helped ease the pain. There’s still a sorrow in my heart, but I know that our life was made immeasurably better by our having moved here.

Growing up surrounded by nature and in close proximity to birds has helped to create the person my son has become. At about eight, his love of birds grew to encompass a love of all things aviation. He’s now become a very skilled pilot of numerous types of aircraft – all of which he now designs and builds himself. Elihu has had the time, space and peace in which to cultivate his love of nature, aviation, music and languages, and now as I contemplate the life we might have had had we stayed in the suburbs of metro Chicago, I have come to understand that none of this would ever have been possible. Our lives have been unquestionably improved by the big shift.

My son has a rare congenital eye condition known as Achromatopsia. He sees no color, has poor acuity and is extremely light sensitive, so he must wear very dark glasses in order to function in the world. Legally, he is considered blind. Whenever I express my regret at his situation, he reminds me that it’s no big deal for him – he’s never known anything else. He says putting his glasses on is as routine for him as putting on a pair of pants. Elihu has many times said “I will not let my excuse be my excuse”. He is wise. As a mother I always wish the best for him, but as there is nothing more to be done about his vision, I must defer. He’s a wise young man, and I’m proud of his resolve. Being low vision sure hasn’t stopped him from anything he’s set his sights on. (Elihu describes himself as an “aspiring overachiever”.)

In the end of third grade Elihu joined the local Waldorf school in town. It turned out to be a life-changing move which profoundly changed the trajectory of our lives. I was hired soon thereafter by my son’s school to play piano for their movement classes, and for many years it was a picture-perfect situation for us. Elihu took up string bass in fifth grade (after putting in his time the year before on violin). As a young child, he loved polkas and asserted that he would one day play the tuba, so bass was simply a stepping stone to his goal. I would never have guessed all those years ago that he would not only reach his goal but exceed it in spades; Elihu has performed in the Empire State Youth Orchestra and the New York All State Symphony Orchestra, as well as won runner-up in a concerto competition and an alternate chair in the All National Symphony. Looking back to that tiny boy in the back seat listening to his beloved polkas and dreaming of how it would feel to play the tuba one day… it just makes my heart well with pride, and it makes me nod my head in disbelief at the storybook way in which it’s all played out.

Sometimes my friends and I have joked that my life in Greenfield is kinda like the old TV show Green Acres. And yes, I find that amusing. In the beginning I really did feel like a glamorous city woman thrust into country life against her will. But now I can say with absolute conviction that I am a country woman, and my son is a country boy. We’re both adept at city life and enjoy that for the thrill it is, but we know where home is. Our home is here. Our home is the Hillhouse.

I began this collection of writings as a means to keep sane, to keep my heart from breaking any further, and to find a virtual family of souls somewhere out in the world who might wish to join us on our adventure. It was a terribly lonely life at the beginning. This was the lifeline I so desperately needed. Truly, this blog (please know I still hate that word – it’s ugly and is not a term I like to associate with this collection of writings!) has been my conduit to the world – I’ve met so many people who I now count as dear friends, and I’ve re-met friends who I thought I’d lost. Also these writings also help me to remember all that we’ve been through and done, and for a gal whose memory has never been her keenest asset, this is a real benefit. ! And some day, years hence, when my son is an adult and begins to think beyond the scope of his current interests, he may appreciate the stories told here. He may glean some insight into his mother, his childhood, his own story.

Thanks for being part of our virtual family, we send you our love and deepest gratitude. 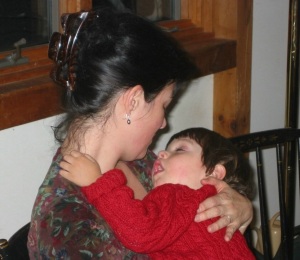 If you’d like to reach me personally, please email me at: hillhousewoman@gmail.com or you can view our current goings-on and contact us through our main clearinghouse site: elizabethconant.com

10 Responses to “Backstory… and Blog”