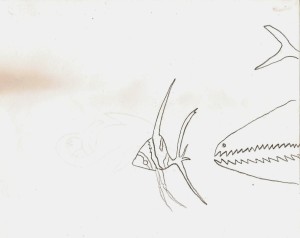 How to console the young artist who has just told me not to speak, not to say a thing, because he is about to draw a tree sparrow, and may ‘end up crying’? It begins well enough, as he copies from a new book, but as he predicted, he begins to weep a little, saying ‘being an artist is hard’ over and over again. Momentarily distracted by the real thing at the window feeder, his lamentation is suspended. He goes back to his drawing and tries to apply what he’s just seen. It doesn’t work. In fact, it is a great disappointment, and an even louder, wetter episode begins.

I try to stay my heart, for no matter whether fake, real or somewhere in between, the sound of one’s child crying pulls at you to fix, to heal, to comfort. But I am steadfast. I know that my son can turn on a dime, from tears to laughter. And so I wait it out. ‘My boobs woulda been making milk if you had sounded like this a handful of years ago’ I say from my work at the table, back still turned to the young artist. True, they would’ve been. That primal aching to soothe would’ve burned up from within and erupted in a spot or two on my shirt. But those days are long gone, and I have been instructed not to interfere with his process, so I try to turn off the mother switch.

Finally, truly despondent, he comes over to me and buries his face in my neck. I hold him, and I just tell him that it’s ok. I remembered that once, years ago, when our beloved cat Kukla had died, Fareed had begun to weep, to sob. I had put my arms around him and told him that he didn’t need to worry; she had died in our arms, knowing we loved her, and besides, she’d had a good, long life with us. He pushed me away through tears and yelled at me (not characteristic of him at all) and said something I will always remember, and something I needed to employ in this current situation. My husband had told me back then not to offer ideas or solutions, but rather just to offer comfort. (Our roles often seems the very opposite of that Mars and Venus stuff; I’d always been the one who’d wanted to fix things.) And so here, with my son, I offered no solutions, only comfort. And it worked. Replenished, he went back to his drawing.

It was quiet for a while. The only sounds in the kitchen were the peeps from the hairy woodpecker at the suet feeder and the hum of the electric heater. I let a moment pass. ‘Watcha got?’ I asked. He came over to show me his new work. He had given up on the sparrow and had instead drawn a fish. And that’s ok, cuz it’s his prerogative. After all, being an artist is hard.