Thanks. I knew I had to blow off some steam, and really it felt good. I liked typing the f word over and over. And as I drove to the airport, I stewed. I know it’s not healthy to stew all the time, nor a lot, but every now and then it just feels good. I was pissed. But, as I kinda thought I would be, here I am the next sunny day feeling better.

After I got Elihu to his plane things went well. Many unexpected little pleasures en route home, not the least of which was an art exhibit in the observation tower at the airport, complete with wine and hors d’oeuvres.  I was tipping back the last of my pinot noir as I watched Elihu’s plane finally leaving the ground. Got a voucher for free parking too. Not a bad start to the weekend. I figured it might be a good time to stop pouting.

Called a new friend who lives here in Greenfield not too far away from us. Her seventh grade daughter was having a lousy time at the over-populated middle school and so she too had just started attending the Waldorf School of Saratoga. We share rides; her mom takes her and Elihu most mornings, I pick em up at the end of the day. Works out well. My neighbor was home, and must have read the ‘poor puppy dog’ in my voice cuz she invited me over without hesitating. It was a nice hang. Nice transition to the time alone before me.

Awoke to an amazing, absolutely unexpected gift from an old friend, and that gave a great lift to my spirit. Just being remembered by folks is nice; being so physically removed from people as I am here, it makes it easy to think I’ve been completely forgotten. After all, I myself can hardly remember my old life some days. Kinda feels like a movie I saw once.

I haven’t done much today but piddle about. An old friend of the Conants is driving to D.C. from Canada today and is stopping by my folks’ for lunch. That will be very nice indeed. My mother always presents the loveliest spreads you ever did see, and the simplest dishes become the tastiest. That’s her thing. It’s more than a thing really, it is a talent. These kinds of meals are becoming a rarer thing as my parents age (and especially now that dad’s Festival of Baroque Music is no longer happening; gone are the opportunities to feed the musicians and their families) and so I’ll savor the moment for sure.

I’ve spent a little time outside today too. Filled up my little rigid plastic kiddie pool – but quickly forgot I now shared my property with a goose. As soon as I’d turned off the hose and come back around the house Max was already in it, swimming about and enjoying himself tremendously. I don’t so much mind this, nor do I mind being in the water with a goose, it’s just that he poops a rather liquidy sort of substance that will foul up the water in no time. Thinking quickly, I run to the basement to get an old bedspread, which I drape over the pool. I realize it won’t work as I’d initially thought as it sinks down into the water rather than covering it, but then a second idea comes to me: the cloth might act something like a ‘pool condom’. If Maximus poops, it will stay on top of the cloth, and by lifting the fabric I can lift out the poop. Most of it. I hope. It looks like it’ll work. I’ll let you know.

Here are some pics from my day so far. Hopefully it will offer me a clean start after yesterday’s rant. (Readership was through the roof though. What is up with us humans? We love drama, don’t we?) 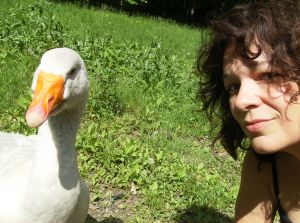 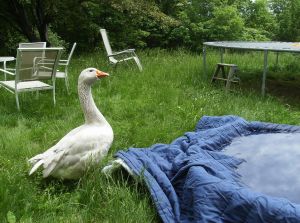 … and later follows me back to the house.

If I ignore him, he’ll start knocking on the door. No kidding. It was cute for a while. Not so much any more. Will have to figure out a solution.

The rooster who never lets you forget he owns the joint.