Today has been a classic ‘one step forward, two steps back’ sort of day.

First off, I did call the gal at the drilling company, and we had a good talk. Ended up getting a lower grade pump with the same warranty. As this pump isn’t for non-stop household use but rather for part-time hours (and at this point only seasonal as well) I figured I could go with the less expensive model. Plus she assured me that any other pumps I found on the internet by the same name weren’t the real thing; they were black market knockoffs. Really? Sounded kinda silly to me, but I didn’t know enough to counter. Plus these pumps were made in Denmark. That I liked. (Much more reassuring than had they been made in someplace like Texas.) I’m already a big fan of Danish design, so I’m going to trust that they make good pumps too.

I joined the crew at the site and watched as they dug the trench from the well to the building, moved some immense boulders and finessed a new line into the Studio. All went well. Satisfied, I left to go pickup Elihu at school.

Elihu’s classmates are each contributing a small drawing of a rainbow which will be used to fashion a larger, end-of-the-year thank you card for their teacher. I carry the pens and paper in my purse and plan to have him do a quick drawing before I pass it off to the mom who’s putting the card together. I linger at the school looking for her but can’t find her. I know she lives a bit further out in the country in our general direction, so I make a mental note to drop the art off at her place later on that afternoon.

By the time I got home and checked my messages, I found the workers had made several attempts to find me – there was a situation that needed some attention ASAP. Apparently a couple of pipes had burst over the winter, in spite of my having drained the system. Or at least I’d thought I had; some friends had come over in October and offered to help me drain the pipes for winter – only we may have been one freeze too late. I don’t know – it seems kinda crazy to me that there should be such damage done in so short a time – but it whenever, however, it doesn’t matter. It’s done. “We looked everywhere but couldn’t find a mop or anything” the kind fellow went on; he felt pretty bad, but there was nothing he could do. I called the shop right away and thanked them. They’d done their job, and they’d done what they could. Which was really just shutting off the main valve after realizing that the place was flooding fast. And we were so close to finishing this project and opening our doors for the summer. So close…

After hearing the messages, I pile a laundry basket full of old towels, drag the huge dehumidifier up the basement stairs, get it all in the car and head next door. When I first see the situation, it doesn’t look so bad – although the carpet in the bathroom hallway is dark with water, it still seems ok. But then I walk on it and feel the volume of water beneath my feet. Phooey. I sop up what I can, get the machine cranking and set up the tubing to drain into a sink. Now I too have done all I can, all there is to do now is wait. Ok. Time to turn my attention back to school business.

Back at home Elihu begins to work on the rainbow for his teacher’s card. He needs to finish his book report too – something he’s been dragging out for weeks now. His teacher has been more than kind granting him extra time for having joined them late in the year. As he adds lines to his arch I test out the markers on a sheet of paper first before handing them to him – as he of course cannot see the colors for himself. He finishes his rainbow then adds a soaring eagle. He signs “Love, Elihu” in the teensiest letters possible a the bottom. Perfect. Now back to the book report. Where is it? I can only find the paper on which I’ve tested the markers. Oh no. Oh no. No! I have been testing out the markers on his book report!!

It’s actually not so bad, because at Waldorf, kids do their assignments in a large lesson book. Elihu has been told that he can do his report on another piece of paper and then glue it into his lesson book. So this will be fine. We can easily cut it out. But this is not acceptable to Elihu, who has now become a raging, crying, frustrated little kid who is fully invested in using this as his ultimate reason not to continue. The next hour is spent with Elihu lamenting between sobs that he’s “been working on this for months“, and that “all his work has to count for something” and therefore he “shouldn’t have to do any more” and me countering that all the hard work in the world is for naught if the assignment is not completed. Crappy job or not, it must be finished. I even use his beloved Waldorf as a tool. I am ashamed of myself, but I am desperate that he finish this assignment. I stay committed to my act, I say that perhaps he should return to Greenfield Elementary if he can’t do the work at Waldorf. It is a veritable battle of wills, of egos. He nods his head yes, that maybe he should go back to Greenfield, because he will NOT do any more on this book report. Wow. He’s committed to his act, too.

I let him writhe on the couch for a bit, to let off some steam. After some time he comes to me as I sit in my chair writing, and he slides in next to me. He doesn’t need any more discussion, any more lecturing. He needs mommy now. So I say nothing, I just hold him. His tears are drying now, but he’s still a little sniffly. I give him the opportunity to ease up on his stance. “Want to just try one sentence at a time?” I ask in a much softer tone, to which he nods yes. I hug him again, and we sit for a moment. He gets up and walks into his room.

Just now Elihu returned with the entire book report finally completed. He threw it at me and said “don’t thank me. Don’t say anything at all or I will be really mad.” Then he left the room. A few seconds later I can hear the whirring of his helicopter moving about the living room. In a while we will have supper. By then things will have settled down. If he’s playing with a flying toy, I know he’s already feeling better.

I’m feeling better too. But I’m not looking forward to spending the money I’d saved on the cheaper pump by way of plumbing repairs (and then some. !). So much for the windfall of a bonus interior paint job! Sheesh.

One step forward, two steps back. Ever onward…

Digging the trench for the new water line

Down to the nitty gritty… 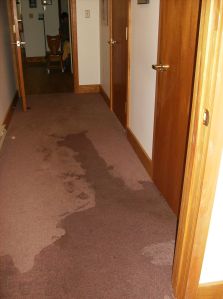 Good news: we have water. Bad news? It’s in the wrong place. Sigh. 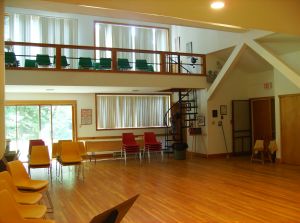 I can’t forget the goal… what a beautiful room, huh? This room has seen over forty years of music and theater and will continue to do so as soon as we’re over this little hump…

Post Script: The Studio used to get its water from a shallow, hand-dug well a hundred yards away (which belongs to the 200 year old farm house in which my brother now lives) but the line ruptured last year. We supplied the Studio with water using a hose from my parent’s house to get us through last season. This year we’re going to have our own water source, making the Studio a true stand-alone building. (We still need heat – but that’s another chapter for the future.)