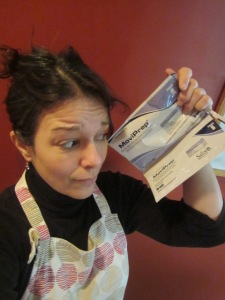 Here it is. I’m about to experience a right of passage, a coming of age. My mortality seems even more real now, my increasing age can’t be denied. The young clerk at the convenient store has been calling me ‘Ma’am’ for years now – but even that hasn’t really phased me, as I’ve managed to ignore his unintentional slights. But the white hairs on my head have moved in permanently and remind me daily – as does the arthritis in my hands, the wrinkles on my face – and now this. My first colonoscopy is tomorrow morning. And in a few minutes, I will begin the dreaded “prep” procedure. My maternal grandmother died of colon cancer, and my cousin, at 46, is a survivor of the disease. It runs in my family, so I have to take it seriously. I need the screening, for sure. But I can still find humor in this, can’t I? I mean really. I’m about to ingest several quarts of a high-octane laxative called “Movi-Prep”. And I’ll be moving to the bathroom pretty frequently for the next six hours from what I hear. I’ve hardly had more than a scoop of egg salad over the past 24 hours, so really there aint much to get rid of. But I expect it will be dramatic. At least that’s what all the hype tells me. I’ve been hearing about people’s colonoscopies, or at least the famous “prep” that accompanies them, for years. Always kinda thought of it as something my older friends had to deal with. And even with my family history, I still kinda blew it off as something other people had done. But this year I face fifty. Time to prep for the future…

That’s kinda what my whole late winter/early spring has been about; assessing where I am now at this point in my life. How healthy am I? How unhealthy am I? Just what might I be able to actually do to ensure that I stay flexible and relatively vigorous as long as possible? I admit, I’ve put far less into action than I’ve intended, but I am making improvements. This is my fifth week of the Atkins diet, and I’m down eight pounds. Not crazy amazing, but it’s definitely something – and my intake of food is certainly no longer thoughtless, in of itself an accomplishment. And I don’t smoke. Or drink. All that is pretty major, considering the sad place I was one year ago. Behind my life was a continuing, low-grade depression which I self-medicated as best I could. I still self-medicate in a matter of speaking by procrastinating, allowing myself to follow distractions – all the usual human stuff. And I feel far more easily discouraged than I’d like to admit, but in the final summation, for the most part I think I’m taking care of my shit. As it were. ! Yes, pun intended. Couldn’t resist.

Seriously, I gotta drink all of this?? See you on the other side….