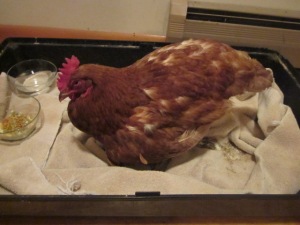 Phooey. Thumbs Up is sick. I’ve been through this before – in fact, it was just about a year ago this time that we lost the matriarch of our flock, Molly. I know, I know… they’re just silly chickens. But of the whole forty-some odd hens we have, Thumbs Up has the most, well, distinct personality. And besides, she’s one of the few remaining (maybe the only remaining, it kinda looks it) genetic descendants of Buddha, another peer of Molly’s. Thumbs Up and Madeline are the ‘old-timers’. The ones we’d like to breed this spring to keep that line going. I realize I’m being ridiculously sentimental here. Really, it does not matter. Genetics is only one of many components to a family – or a flock, I should say. It’s not even necessary. It’s such a silly human characteristic to become overly romantic about blood lines. I guess if you’re breeding a racehorse it might be pretty significant, but come on. Why the hell am I so emotionally tied up in this? For some reason I just want to keep a lineage of chickens from our very first flock. Yes, it’s purely sentimental. But here in the real world, it really isn’t such a practical goal.

When I saw her crouched in the nesting box, her wings hanging down in a very odd manner, I knew. Then when I saw her nictitating eyelid closed as if she were sleeping although it was still afternoon (the eyelid that closes bottom to top), I knew it. Crap. Immediately I told myself she was just about as good as dead. I wasn’t so sad, really. She had a good life, I smooched her plenty, and so she was done. For a minute I thought I’d just leave her there and hope for an overnight improvement. Well. Maybe not quite a minute. No, I couldn’t let her go. I promptly got a towel, wrapped her up and brought her inside. I parked her by the heater near the piano. Oh dear. She didn’t look good at all. Her crop was bulging out and was way too firm, her tail was held at a weird angle. Crap. I hate this. And just because I’d moved her inside didn’t make her chances for living that much better. She was sick.  I just sat there and looked at her for a good long while, trying to muster my courage to take some sort of action. Finally, I gave myself a talking to…Stop whining about how much of a bummer this is, Elizabeth, and DO something!… Now!

Thankfully, I still had the veterinary supplies in the fridge from last year. And it came back to me as I looked over the stash… yeah, yeah… I remember. Ok. Found the syringes and got myself organized. Called my assistant in, then wrapped up the patient and pried open her beak. All meds were successfully administered. We sat back and watched. And, unlike her sister Molly last year, Thumbs Up began to drink. Hurray! She drank, and drank…. I’d given her some olive oil so felt good about the prospects for getting things moving through her system. Gotta keep things moving… we all know the hospital won’t release you until you… well, you know.

Last time I peeked in on her she looked better. True, last year we got Molly better too… twice. Then she finally died. Ich. I’m ready for that to happen too, but I just gotta hope this time we can beat it. We’ll keep her inside a bit longer just to make sure. I’ll run her antibiotics a good ten days for good measure. Why not? The other option is, essentially, to give up. And here at the Hillhouse, ‘giving up’ is not usually the option we choose. Certainly not now!

I’m giving two thumbs up for a healthy hen!

Post Post 3/2/13: I gave up on keeping her inside after four days as she was much improved. I do realize that this might be a mistake and so am keeping my eye on her. She was so healthy that having her confined (and keeping up with the poops) was becoming a challenge. She was proudly roosted on the highest bar last night and I have every confidence that she’s going to do fine. I’ll continue to medicate for a few more days as well…

Another Post-Post: May 11th, 2013, and Thumbs Up is going strong. She is easily the most animated, gregarious hen in our entire flock. And really, back when I made this post, I was prepared for her death. But she’s got spunk. Look for pics of her in future posts!

And yet another post-post: June 24th, 2013… Thumbs Up is the single spunkiest hen of the whole flock. She and Madeline continue to outshine the others with their Houdini–like ability to thwart any efforts at containing them inside the run. Thumbs Up will snatch a sandwich out of your hand if you’re not paying attention – then eat the whole thing and come back for more. If you open the car door she’s in and ready for a ride. She likes to linger near people and is easily picked up and smooched. We lost our matriarch Molly after round two of an illness similar to what TU had in this post, but in some way, Thumbs Up’s triumphant comeback and vivacious character almost redeem the death of that first gal. Talk about happy endings!