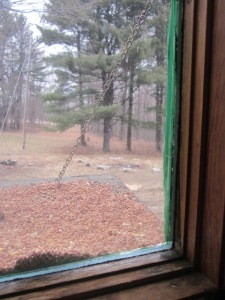 Ok. So maybe not in this picture. (I didn’t want to feel the past half hour spent waiting for the aforementioned birds to have been in vain, so I felt I had to include a photo of some sort. ) But this is the table feeder where we do see em when they visit. And there most definitely were some long-awaited, newly-arrived avian subjects visiting quite recently. (In fact there were a few milling about just a few moments before I pulled out the camera.) Yesterday, in a delightfully Spring-like teaser of a day, with sunshine and temperatures in the low fifties, there was an impressive reunion of birds at our feeder all day long. But today, nearly imperceptible flakes of snow swirl about in the air, and the world is winter-cold again. We all know it won’t last, but it’s a bit disappointing nonetheless. I’m less inspired to do my outdoor chores, and it seems the birds themselves are no more inclined to move about unnecessarily than I.

While Elihu usually hears the new arrivals long before I do, it’s obviously me who’s the one most likely to spot them first. It’s not often that Elihu actually sees a bird in the wild – and not on our kitchen window feeder. Such a small object at such a distance just doesn’t register in his limited vision. But this year – just two days ago – we were able to share a Spring first. My heart was so full of joy that Elihu finally, for the first time ever, in fact, truly saw a Red Winged Blackbird with his own eyes. We had pulled the car over to spend some time watching our neighborhood juvenile Red Tailed Hawk, and were taking turns with the binoculars, when we heard it. That shrill, unmistakeable trilling sound. Instantly a feeling of mid summer washed over us – I almost couldn’t believe my own ears and asked Elihu for confirmation. Yes! That was a Red Winged Blackbird – so he must be very close… I looked to the hedges that ringed the close-by field, and sure enough, there he was, atop a young tree, like a perfectly placed Christmas tree ornament. “I see it!” Elihu exclaimed. So many times Elihu claims to see a bird because he doesn’t want to admit he can’t – but this time there was no mistaking it. I knew he saw it. And I could hear it in his voice. What a glorious moment. Hallelujah, Spring is almost here!

And then there are the Cowbirds. My mother may not feel such warmth for them (they have a nasty practice of laying their oversized eggs in other’s nests, thereby ensuring the success of their offspring and a result, the demise of the hosts’ little ones) but no matter, we are thrilled to see them return each year. The males arrive first and begin to practice their courtship dances. Sometimes we’ll see five males on the feeder at once, all trying to outdo each other. Watching their dances is like watching a piece of hard-won nature footage on a PBS program… We can never quite believe we’re seeing this in real life. They puff up the ruffs around their heads, spread their wings out and appear to grow in size by a good 30%. Then they emit this ultra-high pitched warble which sounds like a computer-generated sound from a video game. They strut about, taking a few steps toward the object of their dance, which may be the competing males or a possible mate. The display lasts all of a few seconds, but they’ll often repeat it a half dozen times in a single trip to the feeder. Absolutely fascinating to watch. We don’t like to think of the predatory way in which they keep the species going, but hey. As Elihu would say, they’re just doing what God made em to do.

I can’t imagine living in a climate where the resident birds never changed. We here at the Hillhouse feel the march of time so much more intimately by seeing the birds that stop by our kitchen window. Spring is a time of both passers-by and return residents; some species stay only a day or two, some stay for a few weeks before leaving again, and sometimes seasonal residents just disappear altogether almost overnight. Lastly, there are those who return to take up permanent residence for the warmer months. All in all, there is a lot of renewed activity on our feeder from March through May.

There are the roadside appearances too. Besides the Red Winged Blackbird, just this week I’ve spotted some newly returned Robins poking around in the short, winter-weary grass. And although I haven’t seen a Bluebird yet, I wouldn’t be surprised to see one swoop past over my car as I wind down the steep hill at the top of Braim Road. And of course, there’s the return of the Hummingbirds sometime around the first week in May near my birthday, and usually the week before – the week of Elihu’s birthday – we begin to hear that unmistakeable buzzing chirp of the male Woodcock from the middle of the big field as he searches for his mate.

Yup, the birds are back in town, and this thin Lizzy (almost, still workin on it) is most certainly happier for it. Ahh, finally. Spring is nigh…

Mother and musician, seeker of knowledge, lover of humor and good food. View all posts by wingmother