We’ve had some gorgeous weather lately. Only today has nature decided to even things out with a little rain. But it’s a good day for that; it’s a lazy Sunday, post-school fall festival, post-sleepover, post initial costume-making effort. Now that the dishes are done, the house vacuumed, some bass and piano have been practiced and some pies and bread have been baked, I find a little time to post some catch-up photos of the past week. 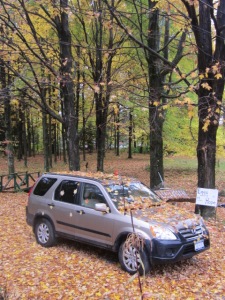 Here’s what things look like today from our kitchen window. 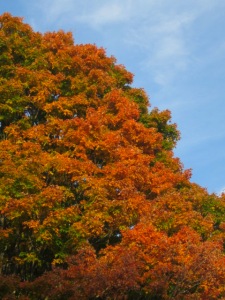 Our fine maple a couple of days ago. My mother just loves this tree. Believes it to be the single most beautiful tree in the great Northeast. Not as neon bright as in falls past, but lovely no less. 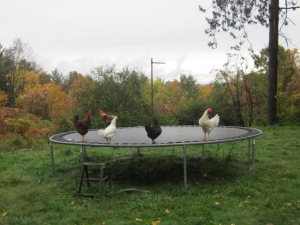 Now why on earth would chickens choose to hangout on a trampoline? Four of em are roosters – what a sight, all of them crowing one after the other. Silly, entertaining birds they are. 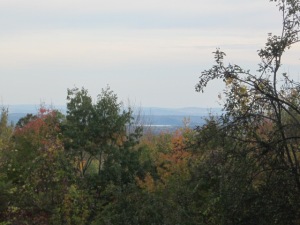 Just beyond the trampoline we can begin to see Saratoga Lake again with the leaves off the trees. 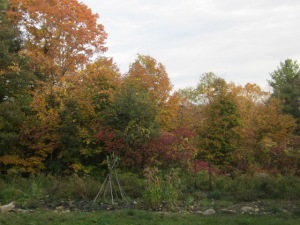 The colors beyond our garden. 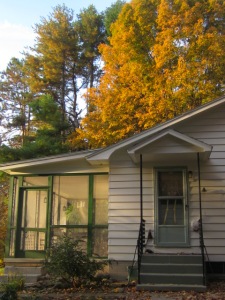 The light from the East, early morning. 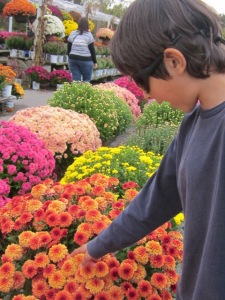 Since Elihu sees no color at all, I’m constantly asking him how he sees things – asking him which scenes pop out, which don’t register at all, and in this case which color mums appear interesting to him. In this case he likes the contrast between the petals and the centers. Makes sense. 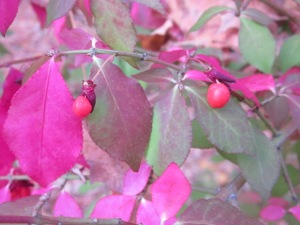 More color back home on our burning bush by the foot bridge over the creek. 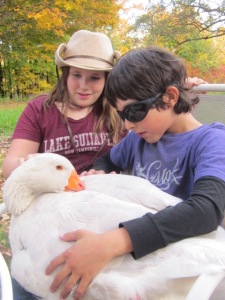 Cally came over after school one day. She’s a very gifted singer – got a great ear and a natural feel. She’s also very much a nature child like Elihu. She rides horses and her family breeds dogs too. 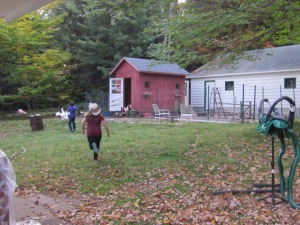 There they go – off to rustle up some chickens. Elihu’s costume is to the right – it’s in the very the first stage in its creation. 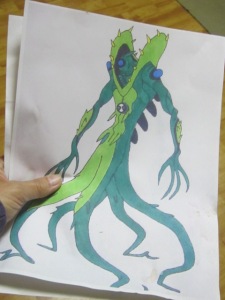 This is the character “Wild Vine” from the cartoon series “Ben 10”. It’s an animated vine that this ten year old boy (Ben) turns into when he puts a magic watch-like device on his arm. It goes without saying that his quest is to save the planet from threatening aliens. Wild Vine may look a little creepy (pun intended), but he’s a good guy. 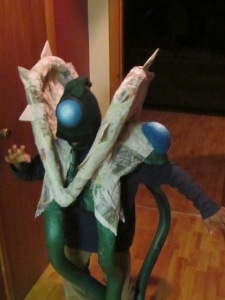 Here’s the costume in it’s most recent incarnation. The frame was created by duct taping foam pipe insulation onto some football shoulder pads and snaking a frame of straightened-out wire coat hangers inside for structure. The skeleton was then covered in good old-fashioned paper mache.  (The paper mache was made from the same flour we use for our pies and bread.) The eyeball and shoulder ‘pods’ are styrofoam balls carved and then spray painted white first, then blue on top in order to give the appearance of depth. A little hot glue here and there really helps out.

On we go into the year… Fall is moving quickly along in spite of a long, uneventful Sunday. I’m grateful for the down time, cuz things will be back up and running full speed soon enough.

2 thoughts on “Middle of Fall”