No matter how prepared you are, there’s always that crunch time which sneaks up on you. Thankfully we were very nearly done with Elihu’s diorama of the Mojave Desert by the time our nerves frayed and he ended up having something of a mini-meltdown. But we persevered, as a team, and got it done. Elihu gave me a heartfelt apology for yelling, and I was happy to accept. Our evening ended on a positive and satisfied note. Until, that is, we discovered that he’d left his binder at school and we couldn’t locate the actual report itself (on which the diorama is based, of course.) A bit of stress-induced bickering followed, but after scouring the house we agreed it was most likely in his binder, at school, and if it wasn’t, we’d deal with it then.

We regrouped, and stepped back to admire the project. All the rocks he used were actually ones he’d brought home from the Mojave Desert himself, when he’d been on tour with his father last summer. We thought that was a nice touch. Elihu had acquired his collection rather by chance – as the vehicle in which he’d been crossing the desert ran out of oil. (Of all places… yeeks. How often does that happen? How bout instead: “About to cross the desert, guys – maybe we should top off the oil and pick up a few extra quarts to be safe”. !? Just sayin.) They’d stopped and left the rv to explore the roadside, and lucky for him, he’d ended up with a pocketful of some cool rocks. Eventually the band was saved by some good Samaritans with oil to spare, and they left unscathed and with one hell of a good story for the books. So with the real, Mojave Desert rocks and the background panel that carries the scene off into the distance (like the ‘real dioramas at the Natural History Museum’ Elihu said), he’s got something to be proud of.

Last night we’d put some time into the project, and Elihu had finally finished his hand-written final copy; cursive, in pen, all the corrections made. Ready to go. He was tired and hadn’t eaten in a long while. I made him a hot bowl of his Grandpa Riaz’s chicken curry – with rice, chickpeas and lots of sauce mixed in. (Big school projects or over-booked weeks require pots of food that can be ladled out and heated up in a hurry.) He kept saying how good it was, I kept saying it was all because of Grandpa’s spice mix. It’s a Haque family staple, and there are choice moments in life when nothing says comfort like Grandpa’s spice mix chicken. Tired as he was, Elihu shivered with cold, so I brought him his fuzzy bathrobe and helped him into it as he ate, rolling back the cuffs and getting him comfortable. “Mmmmm” he said. “I’m so happy right now.” I was too. It was a perfect end to a productive night, the end of a good day. “Mamas are good at this” Elihu said as he dug into his bowl. “What’s that?” I asked. “This. Making me feel good and warm and fed. And making dioramas. Mamas are so good at dioramas.” “Aww, thank you honey” I answered, thinking for a moment that I should make an effort to keep the equation as even as possible, “Daddies are good at lots of good things too… and you know your daddy loves you so very much.” Elihu, wrapped in his plush, navy blue bathrobe shook his head no as he continued to eat his curry chicken. “Daddies aren’t good for this. Mamas are.” Then he looked up at me with the sweetest, most earnest face – so sweet I was tempted to go the Charles Dickens route and turn it into a funny bit – but I dared not tinker with this moment, because I knew what he meant, and it was the most sincere expression of love. I returned a look of love, and we shared a moment of connection. I finally broke the spell by asking him, what then, were Daddies good for? “Getting serious.” He paused. “Going on adventures.” Hm. I’d have to agree. Running out of oil in the middle of the Mojave Desert certainly qualifies as an adventure.  I suppose one could then go on to say that dads are also good for inspiring awesome dioramas too, I guess. !

These days won’t last much longer. I don’t remember making a diorama past third grade, if my memory serves me correctly. And I just don’t see a middle schooler coming home with any such assignment. As I think of it, this might even be it. The last diorama. We enjoyed ourselves though. (And we’re eager to see all the others tomorrow!) And I am loving this time in our lives – can’t say I’m taking a single moment of it for granted. How lucky I am to feed him that comfort food, wrap him in warmth and look at him in love. Although shades of the preteen are now beginning to emerge, he still has the tender aspects of a young child, and in spite of an appetite to learn more, do more and take on more responsibility, he still possesses that certain kind of sweetness that tells me he is still a young boy.

Because I know that this enchanted window in our life will one day be just another memory of many… (Hey Ma, remember that Mojave Desert thing we did for Ms. Reid’s class? Do you still have it?) I am savoring it fully. I am basking in the charm of this age, and trying to make sure the scenes and the feelings are safely tucked away inside me, so that I can revive them decades hence, when I need a little reminder of how sweet things once were ‘back in the days’….

The days of mom, son, and the diorama.

Post Script: As I recall, the tour van had a slow oil leak that no one knew about as they set out over the desert… I offer this addendum in an effort to report the story as correctly as possible, as Elihu’s father has expressed his opinion that I “post selectively”, and that is never my objective here. ! I just write what I know to be true from my own experience of things.

the entire sandy diaorama, with actual rocks from the Mojave desert and Joshua Trees hither thither and yon 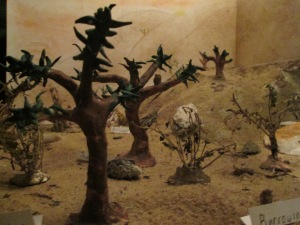 a closer peek at one of those Joshua trees 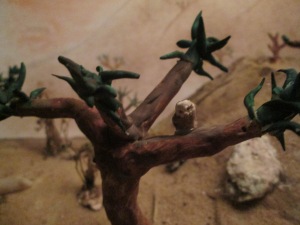 look! It’s a burrowing owl uncharacteristically hanging out in a tree! Maybe not accurate, but kinda cute! (The other owl is actually doing what he’s supposed to and is sticking his head out of a sandy hole below.)