Ok, so we’ve had probably a hundred birds by now, most of whom have had names, most of whom have daily provided us with a generous supply of fresh eggs, and most of whom have ended up on the stove in a big pot surrounded by carrots and onions. So we know what it is to experience loss. Knowing that it’s coming makes it easier, and bonding less with the gal or guy who’s destined for the freezer makes it easier still. And conversely, knowing those certain, endearing qualities peculiar to one chicken alone, and having both named and loved that particular animal perhaps just a a bit more than all the others, well, that is another story. That makes it hard to see em go. Really hard.

We both just kinda thought our eldest and most beautiful hen Madeline would live out a long and happy life here with us. We knew that one day she’d die, yes, of course we did. But we always thought it would be us to find her, years hence, one morning, lying lifeless in a corner of the coop on a bed of hay. Having evaded a good dozen or more animal attacks and weathered hundreds upon hundreds of cold, wintry nights (some five years of em), we just always thought that our dearest Madeline would be the last to leave, and the least likely to succumb to disaster.

The funny thing is, she probably met her maker just about as I was insisting to our friends last night that yes, when it got dark our chickens were honestly in great peril – and especially these days, as we’d both seen for ourselves the enormous resident raccoon trying his skill at the seal on the feed bins. We had to get home, it was dark, and it was becoming more urgent that we get going. We knew we were pushing it. But we’d pushed it before – I guess just not so recently, and certainly not since our new neighbor moved in. Elihu and I have tortured ourselves with a million ‘if onlys’ over the past twelve hours. And until a couple of hours ago, we continued to hold out hope that we’d see her once again, just coming around the corner as usual, as if nothing at all had happened.

Sometimes that does happen. And in fact, it happened this morning. Last night, when we got home, we discovered two hens missing – Madeline and Azalea. We’re not terribly attached to Azalea; she’s a rather run-of-the-mill red sex link (her coloration linked to her gender), and she isn’t from the original bloodline here. And this morning, when I went out in hopes of experiencing one of those rare moments when one girl finally returns from an overnight hiding spot, sure enough, Azalea came around from the far side of the garage, sputtering and making out of the ordinary sounds, approaching the flock with caution. Azalea came, but not Madeline. My heart sank and I felt shame for my instant disappointment. Where was my savvy survivor Madeline? Why was Azalea coming back and not our treasured Madeline?

Now our surviving  flock is rather mundane looking. Only two remain that are related to the first matriarch, Molly. All the gals we currently have are red, black or white. (We cannot forget or overlook our common-looking but delightful favorite Thumbs Up). Ah, but our Madeline – she distinguished herself from the very start as a unique bird. From the eye makeup she wore to the beautiful spangled pattern on her rust-red feathers to the tiny, compact rose comb atop her head – all that plus an aloof, queen-like quality, modest and dignified but yet practical and street-smart too. Sometimes the entire flock would be scattered far and wide in the aftermath of an attack, some bloody, some missing feathers – some just plain missing – and yet there Madeline would be, perched on the very highest rung, safe, quiet, keeping her cool in the eye of the storm. We had such faith that it would always be thus. That it no longer is – it’s simply too much for us to understand. It brings to mind all sorts of existential questions, from whether or not we should even be eating meat to how this afterlife thing might work for animals to lessons we might learn from our loss. We want to memorialize our eldest hen by learning something important from this heartbreak. But what?

Elihu doesn’t cry often, and it took him an hour or so to process what had happened. Finally, he sobs. Me too. Even our flock seems to feel the loss in some way as they all huddle as closely together as possible on the lawn chairs. We both know that the raccoon was just doing his job, that he too needs to eat. That all things happen as they should. That Madeline is at peace. Yeah, we know all this, and we go round and round trying to convince ourselves that it’s all ok. Finally Elihu pounds the bed with his fists and screams. “Damn that raccoon! I do want him dead! I do!” He tells me that he wants to eat the animal. That it’s symbolic. And important. “Look it up, please” he begs me. And I do. I find a video of a fellow cleaning and cooking – and eating – a raccoon. And why not? If it’s a healthy, wild animal, why not? Certainly I can understand Elihu’s need for vindication – and perhaps even connection with his treasured hen. After all, we’ve always believed that an animal should not die in vain. We’ve always felt that eating an animal was in some way honoring it. And since the raccoon ate the chicken, well, I guess Elihu feels he’s showing her his respect. And until this raccoon is on his plate – and in his tummy – I don’t believe my son will feel the matter closed.

“You could just cut off his tail and save that“, my mother suggests, hoping her grandson might accept the gesture instead of the culinary adventure. “Yes, ok” Elihu agrees, “…and then I’ll eat him”. This is a kid who had me fry up crickets and grasshoppers for him last summer and went on to ponder the benefits of a planet that might choose bug protein over large animals… There’s no changing his mind. Now exactly how we achieve this act of revenge I’m still not quite sure. I do begin to hatch a plan: a humane trap and a visit to the local farmer who does in his own hooved animals. This guy hunts too. He likes Elihu and might even get a kick out of helping him out with his project. I don’t know. It’s just so much, so soon. I’m up for the adventure that Madeline has set before us, but still, it doesn’t make this day any less sad. Elihu might just be searching for a way to ease the heartbreak, and for all I know he may cool to the idea in a day or two.

You know the way some things are just such a part of your everyday life that you never bother to record them? You don’t take photographs of that smiling fellow at the dry cleaners who’s been a part of your life for years now, you don’t snap pics of the same places you pass every day on your commute that help to make it the familiar part of your life that it is… There are so many things one just takes for granted. For heaven’s sake I kept dozens upon dozens of journals as a girl, and while I was studying piano with the most interesting and iconic woman for much of my youth, I didn’t so much as even mention her in passing in any one of those journals! How is that possible? All I wrote about was being young and misunderstood. Ich. And while I snap my share of pics – hundreds, in fact – I find that as I go thru my archives, I have very few of Madeline. I guess I just always thought she’d be around. Just yesterday Elihu and I admired her as she nestled down into the ground for a comfy dust bath. I’d thought briefly to get the camera, but then decided not to, as I’d have all summer to get a picture of her doing her thing…

Thank you for being such an important part of our homestead. Beautiful, demure and smart from the start, you’ve fed us and charmed us and kept us happy for years, and for this we thank you and promise to keep you in our hearts forever. At last, no more endless, cold winters or traumatizing animal attacks for you! Hope wherever you are now, you have a flock to keep you company, delicious bugs to keep you fed and cozy dust bowls in which to relax. We love you so and miss you like crazy. The Hillhouse will never be the same as when you ruled the roost.

P.S. This is a really crappy way to begin summer vacation. Sigh. 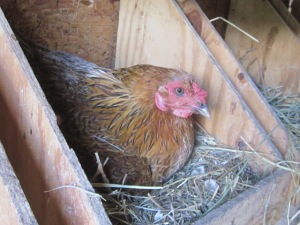 She may have seemed cool and indifferent at times, but she always did the right thing. Here she’s taking a turn on the coop’s clutch of eggs. You can see her pretty spangled feathers. She has a black ring around her eyes too, perhaps not easy to see here, but trust me, she was a looker.  If it can be said of a chicken, she had a great sense of self; she was a no-nonsense hen. Were she a human, she wouldn’t be getting as sentimental over all of this as we are. Oh, dearest girl, we shall miss you for a very long time.

Mother and musician, seeker of knowledge, lover of humor and good food. View all posts by wingmother

2 thoughts on “Sad for Madeline”