Well, it’s here. The day on which Elihu leaves to spend the summer with his father, the day on which I am finally free of all obligations to others. No meals to prepare, no running to the grocery store three times a week, no nudging or cajoling, no reminding or asking, no picking up after…and a whole lot less laundry. And since Elihu is now eleven, I worry about him a whole lot less. He can speak up for himself when he needs (for the most part, that is, as he’s still not completely comfortable expressing himself fully to his father), he can make better decisions for himself, and he’s a bit more laid back about minor omissions in his routine than I am. If it turns out he’s forgotten something – he won’t fret or bum out about it, he’ll just keep going. Me, I’d stew for a while, ponder the ‘what ifs’, rebuke myself for being so stupid, that sort of crap. But thankfully, along with those slender, guitar-playing fingers of his, Elihu retained this easy-going quality of his father’s as well. So he can roll with things, and that’s good, cuz it looks like lil man will be spending a lot of time living out of a suitcase in the coming weeks.

There’s a trip to West Virginia on the itinerary, as well as a drive cross county to the famed hippie jam band fest High Sierra in California. Or, as those of the jam band culture prefer to say, ‘Cali’. Sheesh. My disdain for the jam band world may have been one of the many nails in the coffin of my marriage. In hindsight, I expect my husband only pretended to share my feelings for the culture at large; he and I enjoyed poking fun at the kelping (that flailing sort of pulse-less dance the hippie kids do), the accents, the attitudes, the personal filth in which they so easily lived… He, after all, has played in jam bands for decades now, and the guys in Garaj Mahal, for as dysfuntional a bunch as they were, they were our family, present for Elihu’s first few days, present for much of our marriage. I miss having those guys – and some of those goofy, groovy extended jam tunes in my life. However, that world itself is not a place in which I feel too terribly comfortable. I personally do not enjoy the scent of patchouli and simply cannot stand The Grateful Dead. It it not for lack of trying, let me tell you. In fact, as a thoughtful and intelligent musician I have many, many times tried to enjoy the Dead for myself, and when that has failed, I’ve spent time trying to at least understand what it is about them that has so inspired millions of fans. (I find it super-ironic that the one feature Dead fans cite at their most shining attribute is that they ‘groove’; because no, they don’t. As a rhythm section they are loose and sloppy, and melodically there is a meandering, never-settled quality which physically revolts me before long. I’ve tried to get over this; made many concerted, open-hearted attempts, but it just doesn’t work.) My kid will be living in the jam band world for a portion of the summer, and I am excited for him. It aint for me, but for him – it’s perfect. Lots of support, lots of opportunities to play with musicians, total acceptance and lots of love… a complete adventure. Glad he gets this amazing experience with his dad. Happier still that I don’t have to go along for the ride.

The few days before the great parting are always a strange mix of things for Elihu. One minute we’re laughing like dearest friends, the next he’s in tears over some tiny slight – but before long, he himself will identify it as related to the upcoming change. He loves being here, and part of him dearly just wants to stay at home all summer  doing nothing special, playing with his friends and doing summertime things, but then he misses his daddy like crazy. He wants to see his baby brothers too. Sometimes I’ll find him weeping by himself in his room over the whole mix of feelings. Sometimes he clings to me like a four year old and tells me he never wants to leave. Some times he yells at me that he can’t take me any longer and needs his father now. And other times he shouts to the sky that it’s not fair he can’t have both of us at the same time. Yeah, this time is always a bit difficult to navigate, it takes sensitivity on both of our parts. Reactions and feelings that appear to be about one thing are often about something altogether different. But by now the process is familiar to us, so we get through it ok.

For me, my rough patch will be the ride back from the airport and then the first few hours in the house all alone. While I’m invigorated by the work before me this summer, it’s never as easy as I imagine it’ll be in those first few hours after Elihu’s gone. There’s just something about knowing someone’s in the house – no matter if they’re within sight or not – that just gives the place that extra certain bit of energy. Like the kind our dear Madeline brought to our place. We now call it the “Madeline sparkle”. And when I’m alone in the kitchen, no young boy just around the corner, counting out his Pokemon cards on his desk, I’ll be able to feel it. The Madeline sparkle will be gone.

That’s ok, this summer in particular. I’m faced with a lot to take care of; a body to get back into shape, a healthy way of eating to re-learn, a building to repair, a summer camp to guide into the new space, a cellar full of moldy crap to assess, a garage full of the same (swapping mold for mouse poop here), gutters to clean, weeds to pull, small carpentry repairs to make, painting and assorted other domestic projects plus the very daunting task of marrying the new chicks with the older flock – all this is before me. Me, alone. A plumber and an extra hand to do what I alone can’t, but the rest is mine to do. And I can’t forget the piano too – I need to keep playing, lest my job in the fall become like starting over again. I have a few difficult pieces that I need to start on now, so that by fall they’re in my muscle memory. I have archiving of blog posts, filing and the mundane and dreaded business of taxes and food stamps to face. In some ways it helps to see it all in print like this, but in some ways it just makes me want to polish off a bottle of wine and a tub of spicy hummus in front of an entire season of Gilmore Girls.

Elihu’s in the bath now, singing to himself happy little songs about nothing in particular. He is adding his Madeline sparkle to the place, and I can feel it taking up space, filling the air with joy. Tomorrow morning at this time he’ll be nearly a thousand miles away, and the sparkle will be gone. The house will be completely quiet. Still such mixed feelings. It’s just that little bit of transition time that’s the hardest. But my to-do list and my personal goals will keep my eyes fixed on the horizon, and there’s tremendous promise for some greatly positive results on the other side. That makes it easier to dismiss the familiar yen for food, booze and reruns.

I haven’t measured Elihu against the wall of his closet in months. We’ll do that today, before he goes. And then he’ll put on a white oxford shirt and jeans, lean against the kitchen doorway, and I’ll snap a picture of what he looks like at the end of fifth grade. He and I are both keenly aware that this is the beginning of a time of great physical change for him, and we both want to document it. We mean to take the same picture over the next few years so that we can see the change up close. I sense we two are each at the doorstep of a brand-new era in our lives, as he approaches middle school and I begin to see the birth of a new business in the Studio… I still have some trepidation about what’s in store, and I think I probably will until my project is well underway. No matter what happens, we’re both about to do a lot, and to learn a lot in the process.

Yup, there’s an awful lot of life coming up, so guess we’d better finish packing and get underway. It’s going to be a very interesting summer. 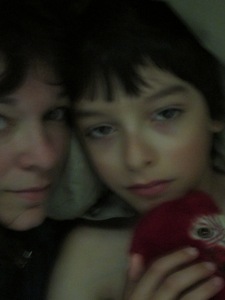 Me and lil man on our last morning together for a while.