It’s been about a year and a half since my son’s father has spent the night – and consequently the following afternoon – with us. I’ve had my questions as to why this has been so; perhaps his new wife didn’t approve, maybe it’s just been a question of time, maybe our last fight kept him at bay. In any case, I’m glad he was able to be here this time, as it made the transition so much easier on Elihu. The abrupt picking up and dropping off of dad at the train within the span of a couple of hours doesn’t usually end well. Thankfully, today my kid is feeling refreshed and glad to be home. He had a good long stay with his father this summer and a day to share with him here at home, so he’s feeling happy. And that, of course, makes me happy too. In spite of a bizarre and very unpleasant hiccup in our evening together, overall the visit went well. Here are some pics of the few hours Elihu shared with his father here at the Hillhouse.

Elihu shows off his new skill. Hard to believe, but his dad doesn’t ride a bike. In our two decades together it was one thing that always really bummed me out. (Can’t wait to go riding with lil man now!) 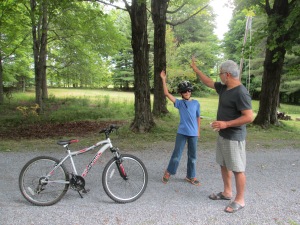 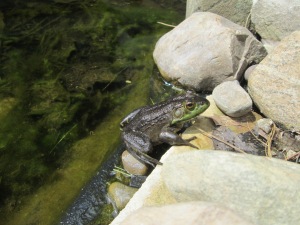 A little model plane building (this kit has been in progress for nearly two years. !)

Got Elihu his favorite fennel seed – made by the “Hoque” company, a phonetic cousin of his one of his own last names.

They bust out the hexbugs. 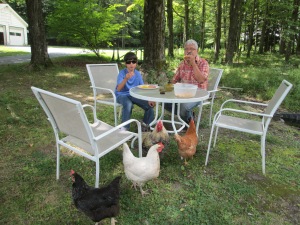 Now time for a little lunch.

Thumbs Up has joined us at the table. If this was testing dad’s patience, then he didn’t show it. His own father is a microbiologist and used to freak out a lot about the tiniest possibility for infection, and I’ve known Elihu’s dad to express concerns where I saw none.

Elihu has Cece (our ‘C section’ bird – she had to be peeled out of her egg) on his lap, which is a good step; the young chickens are still rather flighty as Elihu hasn’t been here to get them accustomed to contact with people.

All of a sudden a front came in. One of those exciting summer rains. Heading into the house in a hurry.

Elihu is almost to big to tussle with like this. I remember how much fun they had wrestling and playing dinosaur when he was smaller. His dad makes the best explosion sounds – I can’t come close. I kinda think that might be a guy thing.

These are the only windows in the house without tinted cling film on them – I’m not sure if Elihu is able to actually see much, as even a 75 watt lightbulb is way too much light for his eyes (he calls that ‘hospital bright).  It’s raining like mad outside and it’s kind of a thrill to hear it even if he can’t really see it. 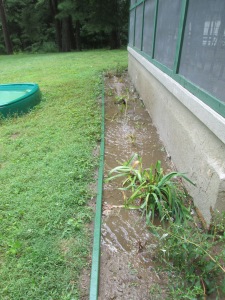 We go out when it stops raining to assess the water situation. This isn’t really a good outcome here – it seems my edging job was done well, but with pooling like that nothing can grow. Barring the expense of gutters, I think the quick solution might be to drill holes in the boards for drainage.

Elihu always insists he can jump a lot higher when the trampoline is wet. Okay, I guess I’ll believe him. 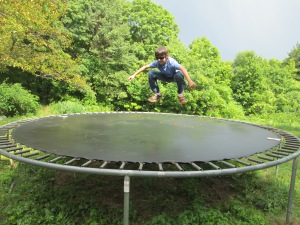 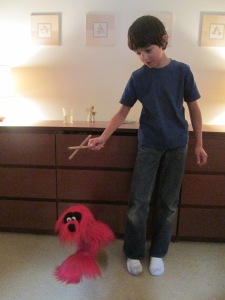 Back inside, Elihu shows me this clever puppet that he got while on the road with his father.

I think sixth grade will be a fun year with this guy. 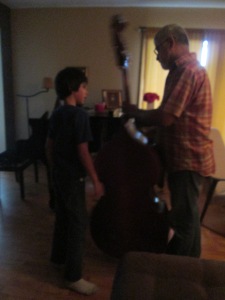 His dad played bass as a kid. 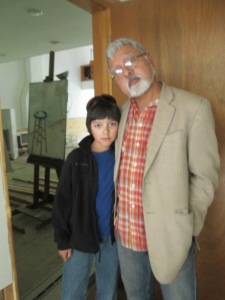 A quick visit to the Studio en route to the train. 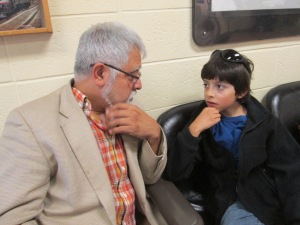 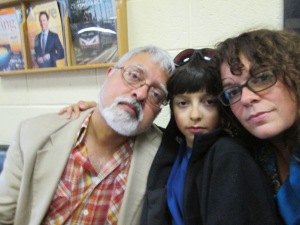 “Family” selfie. (An errant couple of hairs make me look like I’ve got a painted on eyebrow.)

I dunno, maybe this one is more like it.

The summer storm blows in.

Elihu and dad play All Blues. At first I wasn’t going to include this because it’s all blurry, but then I realized that Elihu’s regular vision is like this – or worse – plus it’s in black and white. It’s about the music anyhow, right?

Dad and Elihu play Flood in Franklin Park. (Nice to hear my cheapie garage sale guitar being played.) So glad that Elihu had a bass over the summer. He’s gotten so much better; I’m so impressed with his strength (this bass has a higher, tougher action than the one he played over the summer, it’s also a smaller size/scale, plus the strings are for a larger bass, which makes it harder still) and I’m also impressed with his his ability to follow the form. It’s a long vid, but I couldn’t just stop recording. I might need to do a little research on where Elihu can play with some other musicians around here – he got that valuable opportunity this summer with his dad; I can’t quite give him the same experience. We’ll figure it out as we go along. Lots to do, and so much coming up in the new school year that’s just ahead of us.

3 Responses to “Day With Dad”