While the recent deluge of snow here in upstate New York hasn’t yet warranted a day off of school (in Elihu’s district, that is) we haven’t been disappointed with its arrival. There’s usually a fair bit of grumbling to be heard in checkout line conversations at this time of year, perfect strangers bonding over the plight they now all share; slippery roads, snow-bound cars and inaccessible driveways – yet this time it’s been different. Everywhere people are marveling aloud to each other, “It’s just like an old-fashioned Christmas, It’s like being inside a snow globe… It’s just beautiful…” And honestly, all of it’s true.

Thankfully the snow hasn’t caused us any major inconveniences yet. But hey, there’s still time! We’re having our annual holiday party tonight and I’m concerned how a dozen or more cars will find space to park without incident – never mind getting in and out of the long driveway successfully. Somehow things always work out. I can’t really do much about it now. Most likely there’ll be a good story or two after the thing’s over. And by tomorrow there’ll be more memories too… So many have already been made this past, busy week.

Here’s a digest of our snowy December so far…

Our driveway starts out like a cathedral of white… 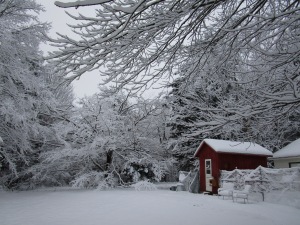 Every branch is covered… the poor chickens don’t relish this kind of snow.

Our house feels cozy at wintertime.

A breeze makes the snow fall in sparkly waves across the forest. 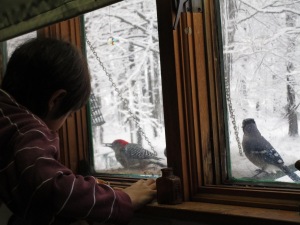 Heavy snows bring lots of avian action to the platform feeder at our kitchen window.

One of our hens has been acting strangely the past few days, so we bought her inside.

A warm sitz bath and a little massaging of the far end to see if she might be egg-bound. 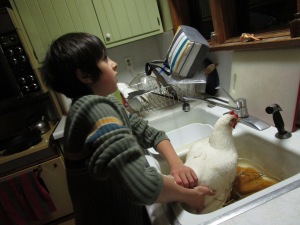 Vet-in-training checks too. He’s actually better at this than I am; he’s not as squeamish and is very thorough. 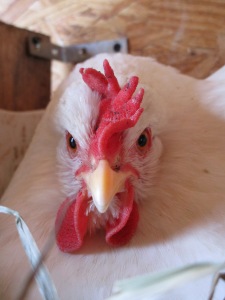 After a home remedy of calcium drops and a night inside, she seems fine. More than fine. Instantly she returned to her clutch and set down on it. When we tried to collect the eggs, she pecked us quite violently. Sick bird? No! A good mama is all! She had gone broody and was doing what she was made to do. In this modern era when we’ve bred all those natural mothering instincts out of our domestic chickens, it can be a surprise to see such ‘old-fashioned’ behavior. The next day I found nine toasty warm eggs underneath her. What a good girl! I apologized to her as I guiltily removed her cache. Just look at her in this pic. If ever a bird could show contempt…. !!!

Enjoying a night in. A little bass concert for mom.

And now… a night out. Remember that $100 bill Elihu won for his Halloween costume? We agreed. It was time…

…to go out for dinner. We’re at Instanblue in Saratoga – the only Middle Eastern place for miles around. And dig this (ok, I don’t get out much – this is probably old news for many), illuminated menus! Usually nighttime is Elihu’s sweet spot, but even with his glasses he found reading this uncomfortable. As for me – it’s right up my middle-aged alley.

Stella brings us the best grilled octopus either one of us had ever tasted. Ever. 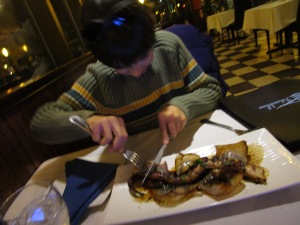 Saratoga folks, ask for the grilled octopus and not the octopus salad as listed in the menu. And for meat and bread lovers, Iskander is a savory treat (that particularly kicks ass the next day as leftovers) and is my recommendation for an entree. Next time we’re going to try the braised rabbit. My rule about eating out: get what you wouldn’t ordinarily make at home. Octopus and rabbit are safely on that list. !

After dinner, a concert. We heard the sixth grade band and orchestra at Maple Ave. middle school and Elihu got to visit with kids he’d known since Kindergarten and hadn’t seen in ages! It was a perfect night out.

Even after a magical night out, there are still chores to be done. Gotta top off the water and food and close the chickens safely in their coop. One little red heating lamp glows through the window.

Our little cabin in the wintry night.

The next night we’re off to have dinner with some friends who live at the end of a very long road through the woods… I’m relieved we made it without incident. 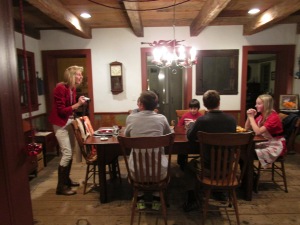 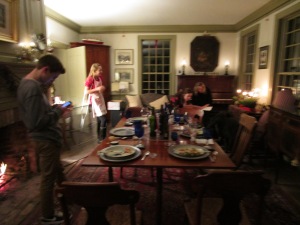 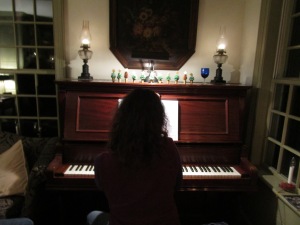 Christmas carols at the old piano.

Love the ancient doors and reclaimed pieces throughout.

Now it’s time for a post-meal jam in the basement. Bryce, singing, was a piano student of mine years ago. I’m glad those lessons on triads and simple chord progressions became useful!

Elihu plays (a full size) electric bass for the first time with other musicians. Yay! 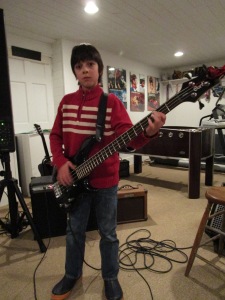 Proud of my lil man. 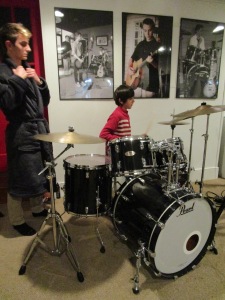 Drums too? Why not. That’s Ethan on the left, patiently waiting for his drums back.

Now it’s time to collect up the gingerbread house that Elihu made earlier with the kids and get on the snowy road home.

This is what our road looks like… deep, snowy forest with lots of hills and creeks to cross.

This morning was bright and blue. 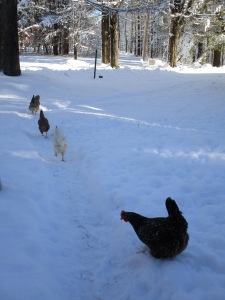 Madeline Two is every bit the leader that Madeline One was. She leads the gals to the house every morning. Sussy brings up the rear.

Post Script: Today was my paternal grandmother’s birthday. Bessie Trimble Scott, keeper of the musician’s gene, was born in Passaic, New Jersey, on December 13th in 1883. She lived to be 101. I think of both Nana and dad today, and thank them for their gift of music. I hope they’re together again after a long time apart…. 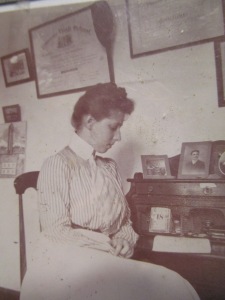