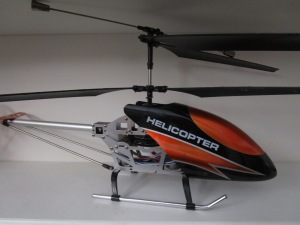 Because Elihu missed four days of school from having the flu lately, he’d been a bit behind in his homework. He was staying on track, and we’d talked to his teacher, so I wasn’t worried. But he was. Poor kid’s been having a hell of a time getting to sleep over the past few months, and now, what with this school thing, it’s worse. Part of the reason is that in addition to school, there are a few other things weighing on his mind.

A few days ago he pulled his two oldest helicopters off the shelf and began an online quest for replacement parts. He misses seeing the giant one fly – it was his first, and we both have nice memories with it. “It isn’t right that it costs more to replace the broken parts than to buy a whole new one. It’s just a waste. It’s not right” he had lamented to me earlier that night. He’d admitted to me that he felt a deep sentiment towards this one particular heli – the big orange one he’d had since he was himself tiny – like the kind of feelings someone usually reserves for favorite stuffed animals. And I’d agreed. This machine was our friend, and we owed it to him to get him back in the air.

But it didn’t seem likely, from what we were learning. In fact, if we wanted to fly this one again, it just made economic sense to get a new one and use it for parts. Elihu resigned himself to this, but I could tell it disappointed him deeply. This was just another mild defeat which added to his sinking mood. I knew there was another piece too – one which he’d been keeping to himself because it was just too heartbreaking to speak aloud, and that was the absence of an old school chum from his life. The boy whose mother felt I made “bad parenting choices” by way of removing feathers from a dead owl or using a cuss word within earshot of my kid… She removed her son from the Waldorf School last year (no, I was not the reason for the change, although I’m sure it relieved her to be rid of me), and Elihu’s had a huge hole in his heart ever since. I emailed her recently about getting the boys together – completely on her terms, on her turf, whatever could work – but heard nothing back. That’s the way she handled the situation last time, and apparently it was still her method. Last year it took me three emails plus an intervention by the class teacher to get her to admit the reason she wouldn’t agree to our sons playing together. (Ironically she’s a psychologist and her job is to help people through communication. !) Plus the blog. She finds that to be the most dangerous of my bad parenting choices. Even after I removed every last image or mention of her son – and apologized profusely – even then it wasn’t enough to pacify her (when I apologized in person she had literally said “no worries”). And so my kid suffers. Many tears have fallen over this lost friendship, and we’ve spent hours parsing over the ‘what ifs’ and ‘what might yets’. Elihu has learned to stuff it down, to forget it for now. But tonight, feeling the stress of being behind in his work, unable to fly his favorite toy and long out of touch with his old best friend, he succumbs.

He’s curled up into such a tight ball on his bed that I can’t lean in to kiss his forehead. Instead I kneel beside his bed and put my arms around him. “Mama, I’m really scared. I really am.” I hate to hear this from my brave, spirited and wise boy. But I can’t indulge in my own feelings of fear and uncertainty; I need to provide comfort. “What are you afraid of, sweetie?” I ask. “I’m just afraid,” he answers me. “Of everything.” I tell him that I am too, and that sometimes we just need to break things down and tackle them one at a time. He was behind, but still keeping to a schedule, so that was good. We’d found a website that sells his old helicopter, and that was good. And we’d sent an email to his friend, so we’d done all we could on that front. Until his friend was a teenager with his own ability to communicate with us, sadly that one would have to wait. But besides, wasn’t life sometimes magical for us? Didn’t the possibility exist that we might see him sometime when we were out and about in the world? After all, didn’t crazier, more serendipitous things happen to us from time to time? Elihu nodded his head a bit. I stroked his back and sat with him in silence for a moment. When he gradually straightened up, I could feel the bed was wet with tears where his head had been. I leaned in and kissed him. “It will be ok. It will.”

After our talk I’d left him to sleep, but even after two hours had passed he hadn’t been able to turn off his mind, to forget all that troubled him. Finally, he stormed into my room with Lenny, his favorite stuffed parrot, and harumphed as he dove into my bed. I didn’t say anything, I just turned off my computer and joined him. I understand so well the challenges of sleeping at night; my own thoughts race through the never-ending to-do lists and possible future scenarios, both hopeful – and frightening. Always just a couple steps ahead of a dire economic state, I live with a constant, low-level of stress which I’m afraid has somehow bled over into my son’s consciousness. I know our household is full of humor, music and nature. I know unquestionably that I have given Elihu the very best home life possible within my means. But I also know that he, like me, feels the edge on which we live. And he, like me, is physiologically prone to anxiety and panic. And he, like me, has no social life to distract or entertain him. He has but one friend with whom he meets outside of school, and those dates are too few, I know. He, like me, is for all intents and purposes, a loner. And that’s not a bad thing; for the most part we both enjoy living a quiet, isolated life in the country. Being a loner truly isn’t the same thing as being lonely, but tonight it really does feel just as bad as it sounds.

I realize that this will pass. Elihu’s an insightful kid, and so he knows this too. Things won’t always be thus. And no matter who or what it is that’s doing the flying – even his old favorite aviator, the tireless Wandering Albatross – not a one of them can keep on flying forever. Eventually everything must spend a little time on the ground.