Some folks with an eye on the more esoteric spiritual news of the world may be aware that 2015 promises to be a year of remarkable and sometimes heretofore unexperienced opportunities. As I reflect on a very important year of growth and new possibilities in my own life, I can’t help but wonder if this might be true. Many readers and friends no doubt will think this all bunk; that things happen as they will, actions bring about consequences and it’s as simple as that. But me, I believe there is something to this 2015 being a year of unprecedented possibilities. This is the last day of my 51st year, and just recently, I had something of a minor revelation…

Recently, I was in the garage, swearing under my breath as I sorted out all the chick-raising paraphernalia that needs to be unearthed once a year, cleaned and brought into the house in order to temporarily house these fuzzy newborns in our living room. My eyes landed on an old licence plate nailed to the wall; one of the last mementos I’d kept from my growing up in Wilmette, Illinois. My father had chosen the plate – long before chosen numbers were considered vanity plates (or required extra fees). The plate read “ELI 51”, a reference to both Elias Clark, a mentor of his from college, and also a nod to Elihu Yale (the philanthropist and fellow who paid for Yale’s first building, hence the name of the institution itself). Rather than choosing his graduating year, dad had for some reason opted to memorialize his freshman year there.*** As my eyes landed on the plate, I had a thought. I was 51. It too, was my freshman year – the year in which I’d begun to rebuild my father’s Studio. The year in which so very many things were beginning anew – from career, to my duties as a parent, my social life, even my health. My name, of course, was also referenced on the plate. And if I took 2015 – and made a simple reversal of the numbers, it revealed my current age in this transformative year. I’d tossed so many of our old license plates – yet had saved this one. And now, it seemed almost a sign of confirmation. This, my 51st year, had been huge in many ways. Wish I’d realized it sooner, but better late than never, I suppose.

I grabbed the plate off the garage wall and brought it in the house. For some reason, it lived on my kitchen table for a few days while I began to ponder more deeply just exactly what 2015 – and my 51st year – had brought me. For one, it was my first year without my father. And second, it was the year in which I began to address the reconstruction of his Studio in earnest. At first glance, it might not seem like such a great year; events began to appear just when I stared to despair that this was all a horrible misjudgment of mine to think I was equipped to take on such a project. Panic attacks resurfaced with a vengeance, I began to put on weight, and there was less money coming in than ever before…. yet still, other things began to happen which offered some hope that maybe, maybe things weren’t as terrifying as they seemed at first glance. My 51st year has been a strange and internally turbulent time, but no matter, it’s been a time of growth. It’s been the first year in my nearly seven years here – since my surprise divorce, and the intense heartbreak and betrayal that came with it (not to mention the cross-country move and separation from friends and places I loved so well) that I’ve begun to feel as if there might actually be a happy future yet ahead of me.

Tonight I played piano for the eighth grade play. We wrapped up an intense month of rehearsals and performances. I’m so very proud of all the kids, in awe of their teacher who directed and produced the whole affair, and very relieved it’s over. It leaves me tonite feeling happy, satisfied and full of inspiration for all the creative experiences yet to come in the years ahead here in Greenfield.

All that being said, I’m not going to pretend I’m down with this aging stuff; I’m more than disappointed that age is beginning to show itself in my body, and I’m a bit pissed off that my neck is starting to look like someone else’s. But all in all, there’s so much more to be equally jazzed about, so tonite I’m not quite as nostalgic and backward-looking as I usually am on the eve of a birthday. I’m over the symbolic half century mark, and my days of youthful beauty (and that certain power that comes with it) are behind me now, but it doesn’t sting quite so much. There’s so very much to look forward to, and I’m grateful to the stars for all the opportunity ahead.

Kinda crazy that I carried this thing with me tonight, but here it is. Last night of Elizabeth being 51. 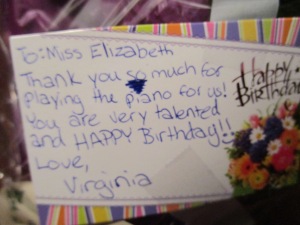 From my dear, sweet piano student Virginia, who sang beautifully tonight. She got me flowers! So humbled. 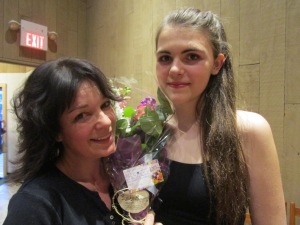 Here she is, this wonderful soul. 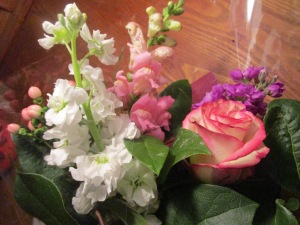 I love love love flowers. The kindest gift, given in love.

He came nine days before the 7th, but I still consider this child my best birthday gift ever.

***Post Script: Mom’s told me that my blog has crossed into the realm of fiction as I’d related that our license plate had been a choice, an early version of today’s vanity plate. In fact, it was purely coincidence that provided the Conants with ELI 51, and it was only after the fact that they’d tried to assign meaning to it. I still find it interesting – and meaningful – that such a plate was randomly assigned. And my dad, although he received his MA in 55, did not attend school in 51 – and in fact, that was the one year of many during which he did not attend school. Ok. That should make mom happy. Regular readers will hopefully understand that it’s never my goal to create fiction here. Things are crazy enough without embellishment! (Ok, so now I’ll also add this absolute non-sequitur that mom herself suggested I post – I suppose because it is the absolute truth, unlike the fanciful embellishment of my story: both Robert Scott Conant and George Herbert Walker Bush were in Yale’s 1948 graduating class. That’s your interesting but maybe-not-so-terribly-useful piece of trivia for the day.)

4 thoughts on “Fifty One Finished”