We’re just a few days into June, but still, May seems eons ago now… Lilacs have browned and withered, the trees are all completely leafed out, and our thoughts turn now to graduations and picnics… I wanted to remember the recent events before too much time went by. A day or two in our modern culture can seem like a month, and I worry that the most recent weeks will be lost if I don’t document them now. As of this writing, I’m aware that this is all old news, but please indulge me as I share with you the events of late May here in Greenfield.

Much is changing in our lives these days; we’re soon to lose Martha – as well as the last remaining open fields in our small hamlet (several new “For Sale” signs indicate more new construction may be here very soon), my son is on his way to seventh grade, the wildflowers alongside our road have succumbed to their annual cutting from the town’s over-zealous campaign to keep the landscape looking as tidy as a true suburb, and at last the discomfort in my knee is no longer something I might simply be imagining – it’s been diagnosed and the verdict returned: I too, am getting older. Arthritis has made itself at home in my very own body. Nothing is as it was.

Every few years in one’s life there comes a time of sameness – where you fall into a little groove in your life; you see the same people, you do much the same thing, you eat the same things, watch the same shows, sing the same songs. And – you even look pretty much the same as you always have. For a year, maybe a couple of years, maybe even a decade – life gets into a comfy little routine, and while there are times when you might find it confining and a bit too predictable, still, it feels nice. After all, your life is familiar. You know where you are in relationship to everyone else. And things are just fine the way they are. You might even wish things could remain so until the end of your time here on this planet. Only thing is, it can’t stay that way forever. Nothing in this particular universe can remain static for long. And so…. one moment you look up and find that the landscape has changed. Friends have died, places have changed, and your body no longer looks or feels like the body you thought you lived in. There comes a critical mass of evidence from various sources, in and around you… and then in a flash, you get it.

There may still be many wonderful adventures ahead in your life, but that doesn’t soften the sting. Things have changed. The landscape of your life is all of a sudden very different. And so you pause for a moment, cuz it’s heavy stuff. The path you thought you knew well has taken a turn, and you weren’t prepared for it. So yeah, you can’t help but grieve. But still, at some point, you’ll have to move on. Even more change than this is yet to come, whether you like it or not. So you gotta get up, take a breath in, and relax into the new life ahead…

Hard to believe that 12″ of elevation made all the difference between life and death. The grapes on the bottom tier suffered from a couple hours at 32 degrees, while the vines only a foot higher up were spared. Sadly, Michael’s lost four years of growth overnight with this late-May frost.

The leaves and tiny baby grapes just crunched to dust in my hand – and less than twelve hours after the freeze! Devastating news to Mike, who’s worked tirelessly for years just to finally glean a modest crop or two of fruit.

See the tiers of wire? Vines on the top level did not freeze – those only inches below did. Amazing.

A happier sight: Friend Jo (who grew up the next property over through the woods – only we never knew each other!) rides her Mustang Sierra to the Studio to check out our new ‘trails’ out back. She rode to our place a couple miles through various trails through the woods to the north, where she has her stable. 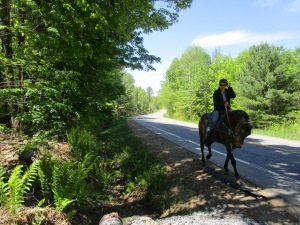 I’ll have to savor this view; soon the property across the road will be sold and likely developed. Something I never, ever in a million years thought would happen.

The trails were kinda rough. We may need to let the debris settle and ‘cook’ for a year. Then we can pack down the softer material and begin to flatten it. For now, it just offers a nice pathway through the trees.

This will be a nice parking lot when the time comes. In the extra space beyond, we’ll have a grassy area with picnic tables and concrete pads for sculpture exhibits. (The trails extend out into the woods from the far end of the open area – upper right corner of pic.)

Twelfth grader Dan came over to show Elihu a couple of chords on the mandolin. He made the instrument the focus of his senior study – and went from knowing next to nothing about the instrument to becoming quite an expert mandolinist!

This was just what Elihu needed – now he’s off and running.

Elihu draws his signature cartoon character “Stanley” on the board in his medieval cloak, as he awaits his classes performance of monologues. 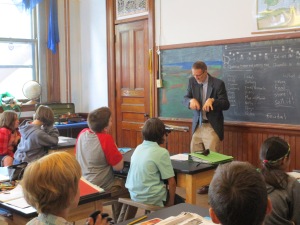 Mr. Esty encourages the children to add more physicality to their pieces by doing so himself… 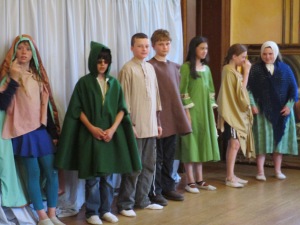 A beautiful job by all. But I did have a favorite.

As I had to take over for Elihu in the pit orchestra (tambourine w/Mr. Esty on violin), I missed the very beginning of his monologue, and the end was a bit short too. My kid, if I may say so, was the most animated of the bunch.

Grandma was partial to “Giles” as well..

Back at home, relaxing with those he loves most.

Nothing so restores the soul as a quiet moment with a gentle hen. 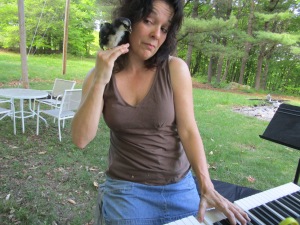 My version of chick rock.

Oops! Every now and then it happens.

The penny kinda gives some perspective. This egg was really more like a pigeon egg.

Elihu uses a shield made in 5th grade during their Greco-Roman studies block. He is deflecting the awesome power of a four-week old chick. !!

He will not relent! (The chick looks confused.)

We’ve decided to empty the garage of all our past costumes. The mice have wrecked so much, it seems futile to keep holding on to them, regardless of the hours and hours of work they represent. 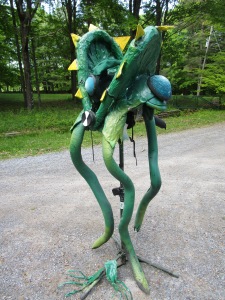 With the kid inside it looked even cooler.

Time now to give some of em up to the fire gods. Elihu often says I have something of a Jim Carrey-esque vibe to my facial expressions.  Guess I see what he means. 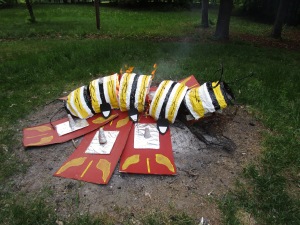 Dust to dust… (Extra points awarded to those who can spot the Caddyshack reference.!!)

…then roars into a short-lived inferno.

No biggee for the kids, who ran back to the trampoline almost as soon as the flames started.

After the initial burst of paint-fueled flames, we topped it off with some wood and then roasted marshmallows over the fire.

Goodbye, dear neighbors! Always love to have you stop by for a visit. 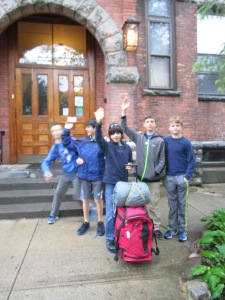 The sixth graders before leaving for a two-day excursion which will conclude their Medieval studies block. It rained the whole time, but they had a wonderful experience even so. It’ll be a trip they’ll never forget.

This is my new post these days; long hours spent at the farm keeping Martha company. Lately she’s become quite angry and belligerent with mom and me. I don’t take it personally – it’s got to be frightening to lose control over one’s life. Hopsice requires having someone in the home round the clock, and Martha’s still not thrilled with having people in her home all the time. Can’t say I blame her. We’re all doing the best we can. 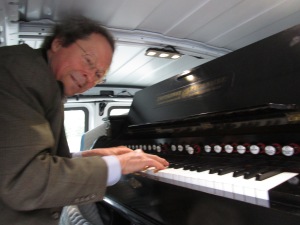 On a happier note (pun slightly intended), dear friend Ken stopped by for a quick visit. He gave me a little demonstration of his Viennese Harmonium – from the back of his rental van.

How much fun is this? 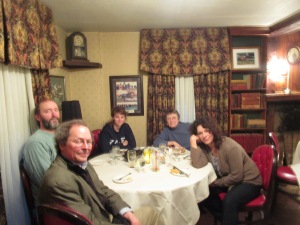 Ken and his daughter took us Conants out for a lovely dinner. That’s my hermit-like brother Andrew on the left. A rare sighting!

Spring is marked each year by bedside bouquets of lily of the valley, and a few chapters of our treasured Bird Book for Children. We finished the book on the last eve of May. Til next year, Mr. Burgess.

When all is past, there lies pure comfort and peace.

3 Responses to “May Past”