To read all of Nelly’s poetry, you can visit poemsbynel.com. 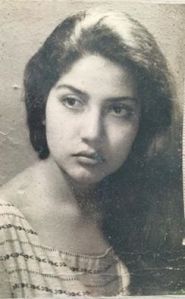 My former mother-in-law probably never really liked me. But I suppose, after being family for over two decades, she had likely come to love me in some way. I know that I can say the same of her. She was never terribly kind to me, but it didn’t hurt me as much as it might have, because I realized she had come from a different world. Hers was a culture in which women served their men, a culture in which her power lay in her role as daughter, sister, mother and wife. Catholic by birth, spiritual by nature and married to a Muslim man for over fifty years, she was, to say the very least, a mixed bag. She was never entirely comfortable with the fact that I had my own life, that I had my own pursuits, and most of all, that I didn’t give it all up in service to my husband.

Nelly was born in Chile in the early ’30s, raised in Peru (where her father oversaw the crews that cut into the dense jungle to build roads – something akin to a culture of the Wild, Wild West in America) and lived her adult life in the Midwest, starting her American adventure in Ohio, then moving to Chicago. My ex-husband was her only son. The trio was close, and despite my being married into the family, I never made it into the inner sanctum. The group was rife with personal dysfunction, yet in spite of this, they each enjoyed a good deal of financial and professional success. I marveled at Nelly over the years; how she could be so savvy with some things, so progressive in her spiritual beliefs, and at the end of the day she didn’t really have any close or lasting relationships, nor did she really seem to engage deeply with anyone outside her small family. She’d have short, intense friendships that would burn out when she, clueless to the needs and expectations of her companions, would demand too much of them or leave them worn out. Nelly lived in her own world, and she created it the way she wanted it. She, a woman who dyed her hair fire-engine red using her husband’s Congo red laboratory stain, was indisputably one-of-a-kind. She drove me nuts, but I do owe her a debt of gratitude for helping to create a major shift in my life and my understanding of the world.

Nelly had been a designer and a very skilled dressmaker in her early years, and she always had an artistic and musical sense. She wrote poems, she sang, she painted. As she lay in her bed this past year, Fareed played guitar for her, Riaz played recordings and delighted as she hummed along, and Elihu recalls reading her poems aloud. Shortly after she died yesterday in the early morning, peacefully in her sleep, Fareed picked up her book of poems and it fell open to this page…

Spring will be here soon

I see the seagulls

With the lone rower

Across the silky waters