When we arrive at a milestone, I think it’s human nature to offer up proclamations about the event’s significance. It feels restorative and hopeful at the conclusion of one chapter, and at the dawn of another, to identify the things that have happened, to acknowledge the lessons we’ve learned from those experiences, and to posit an improved vision for the future that awaits us.

I too feel the urge to summarize, to identify my overarching life themes of the past decade. A quick look through my personal journal entries from the past several New Years Eves shows that although I’ve lived through many, many adventures over the past ten years, my hopes at this time of year are nearly always the same. And each year my failings are also nearly identical. I have likely been wrestling with the same private demons for my whole life. While I do seem to get some purchase onto new ground each year that passes, sadly it seems to be at a much slower pace than I might have envisioned a decade or two ago.

It was in 2009 that I first called New York my home. And it was in 2010 when I first began to refer to our little homestead here as The Hillhouse. Shortly after that, I found I could no longer tolerate the emotional turmoil in my life without an outlet, and so my inner life found its way into an outer expression in The Hillhouse in Greenfield. I had no idea what I was even doing back then – all I knew is that I had to write, I had to get what was in me out of me. My objective was not to “have a blog” – I’m not even sure I quite knew what a blog was back then – all I knew was that I was starting my life all over in a new part of the world and I felt very alone. Heartbroken and hopeless. It was too much for me to bear, so I looked for expression and connection through the only means I had available.

Although it may seem far too obvious, I can see that today is a perfect marker, a perfect delineation between my then and my now (and beyond)….

The very first and most obvious piece of evidence I think of is that of my advancing age. At 56 it might not seem that aging should be foremost in my mind – but it is. And it’s more than just vanity. Yes, a great deal of it – if I’m to be completely honest – is about vanity, but more disturbing are the physical changes that are occurring that will come to adversely affect me at some point. There’s the stuff that’s to be expected: weight gain (one must become vigilant about careless food and drink after 50, I’m convinced of it now!), there’s the loss of height, but most alarming is the rapid change in my hands and my joints. My spine is succumbing to gravity, my hips are so much tighter than they’ve ever been, and my fingers seem to lose their grip on something daily. At age 18 I broke my neck, and in the past few months the injury has come back to cause me some concern; I now feel slight electrical tingling in my arms and even my head itself, and from this new reality I don’t know if there is any retreating.

This is tolerable when I think on the few things of value I may yet add to the planet. One thing, of course, is my son Elihu. He is what motivates me to get out of bed in the morning, and I know for sure he is the main thing that keeps my almost 85 year old mother going too. There are a few things I still need to do (doesn’t everyone feel that way?) and if I can conclude this personal business then I believe my growing impairments will be slightly less frightening. I have a list – lest you think I’m just wishing for a few more good nights on the town and a couple more singing dates – and I will henceforth take care to clearly map out the steps and check them off in a timely fashion. First thing on the list: get the kid into MIT. In the coming year all else will be a sidebar. My job now is to support my son in any way that he needs. Once he’s launched, I can turn my attention to the rest.

I look so different, so much older, than I did when we moved here from Chicago. And I kinda wished someone would’ve given me a heads up. Maybe then it wouldn’t have come as such a surprise. But is anyone ever truly ready for this? For me, things were pretty much ‘business as usual’ until I hit 53. Then stuff just kinda started to change really fast. I look at my friends through the lens of Facebook, and I can see the witching hour making itself apparent in their countenances too. Protestations are silly. I am SO not a fan of people talking about “internal beauty” or “80 years young”. Fuck that. Seriously, fuck all that bullshit. The bloom is off the rose already. There is no going back. No 60 year old is more beautiful to gaze upon than a 30 year old, and reduced flexibility and mobility suck. Sure I’m smarter, more experienced and more insightful than I was even a decade ago – but that aint gonna stop my hands from dropping the last wine glass on the kitchen floor or finding my limbs painfully stiff after a half hour on the couch. Sure, I workout regularly – and plan now to workout even more, and yes I will be increasingly mindful of the things that I need to do in order to stay at the best of my physical abilities, but the march of time – the physical declining of my body – this will not ease up as time passes. And this is a reality that is only just now truly settling in. I feel that the more deeply I can make peace with this aging thing, the easier it’ll be to move through it. To move through the next decade, more specifically.

And then there is my mother. She too is proof of the big changes that have transpired over the past decade, as her own physical situation has deteriorated quite a bit in just the past few years. I can look at her and get a fair idea of what lies ahead for me. I have her hands, her bad and scoliotic back, her bad right knee… It doesn’t worry me as much as it might have if I’d had no warning; at least none of this will come as a surprise to me. What is a tad surprising is the way in which my mom has recently begun to make offhand remarks about her death. We were looking at a reclining chair for her a few days ago and she said something about choosing a color that I liked. And I can assure you there was no hint of humor in her voice… While a year ago she would talk about living to see Elihu graduate from MIT (yes, we do like to put this particular cart before the horse), now she has amended that to say that she would be happy just to live to see him be accepted at MIT. And that is a different thing. Her heart is in continual Afib these days, so as a result she’s very easily winded and finds her energy gone after simple tasks. I can understand how she’s losing the resolve to envision things she once did. Her talent and gift to the world has always been that of superb cook and host; with that role diminished to only a handful of dinners a year, and hardly the energy to see those to fruition as things are presently, I can imagine this hits her hard. We Conants don’t really talk about feelings as a family. Never have. And so as we find ourselves in this new territory – on the verge of a decade that promises to bring change upon us more dramatically than ever before – deep inside I think we are feeling the sorrow of imminent goodbyes and major shifts in our reality…

I’ve spent a good deal of time wondering at the things one must do in order to find resolution and conclusion in life. My feeling is that if one takes all the chances one can, if one makes strangers smile and occasionally rescues spiders from the vacuum cleaner, if one is generally a kind person who does things to the best of their abilities – then there should be no regrets, no nagging feeling that their life has somehow missed its mark. I have very few regrets – I might even be so bold as to say I have none – because I know that if I were presented with the same choices in the same time and with the same emotional tools as I had at the times of those choices – then I would most likely behave in the same way. If one simply acts as a good person in their own sphere of influence, then I honestly believe they’ve done a fine job at being human. And I should think that believing this would help a person to accept the changes and losses that life inevitably brings. Of course my ending is not showing itself to me in an acute or obvious way at the moment, so it’s easy for me to say this now. We shall see.

When we moved here just over a decade ago, a majestic beech tree stood in the yard. It was enormous, and right after the view, it was usually the first thing one noticed on the property. A few years into our residency here the tree began to drop its topmost limbs. Where once we could see only branches, now the sky was showing through. I was told by many folks that the tree was in the process of dying. At first it was alarming; we really loved our beech tree and couldn’t imagine the space without it. Maybe it was dying – I mean, after we’re grown and have physically matured, are we all not in the process of dying? – but yet it was still so beautiful. It never ceased to be stunning. It’s probably lost a third of its volume in the past few years – it is not the tree we first knew. But this does not stop it from being regal. It does not prevent us from loving it as we did. These days I can begin to imagine how the space will look when it’s finally gone. Where there once was shade there will be a great patch of light. It will be a huge change on the property. And then, one day, it will not. When the reigning tree has reached its limbs to the sky and then finally dropped them all onto the ground, it will have been the completion of a tree’s perfect life.

And that resulting patch of sunlight will usher in a fresh new chapter. 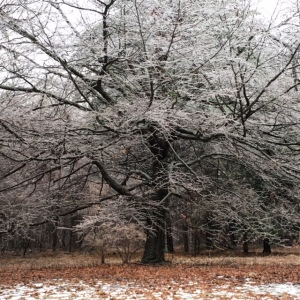 4 thoughts on “Ushering In”