Elihu’s fourth grade class has been studying Norse mythology, and so their class play this year was about the Three Trials of Thor. Tonight we went to the production they put on for the families. While it may have been an effort to get my dad to the show, I’m glad we did. We’d had to borrow Martha’s collapsible transport chair to get him there; without it he couldn’t have joined us. I felt lucky that mom, dad and even Andrew were all there for the play. It’s not often that we Conants are all together in one place. And these days I can’t help but wonder on the few times we do manage to pull it off, if this might not be the last such occasion. You never know… Elihu was beside himself all afternoon with sheer anticipation of the show itself, and when it came time to perform, it meant so much to him to have his family there. And later, surrounded by classmates and friends, with that frolicking post-show energy buzz all around, he was one extremely boisterous and joyful child.

This little production was more than charming, more than a cute class play… it was infused with love, intelligence and good humor too (and some pretty sophisticated, old-timey language!). And if I may say so, my son spoke his lines with a robust, un-hurried intentionality that is generally not too terribly characteristic of a nine year old kid. Yes, I think he was good. No, I know he was good. Others certainly were too, but Elihu, he had a certain thing… The pipes kinda run in the family. That he’s got em makes me smile to myself – but that he uses em and enjoys using his gift… that absolutely fills me with happiness and and a deep, maternal satisfaction.

I feel slightly self-conscious about posting so many photos – maybe even a little like an over-zealous stage mom, but hey, it’s part of my job, right? Surprisingly, I was the only person snapping pics of the kids as they got ready – and also as far as I know the only one sneaking a shot or two during the play. There will be professional photos and even a video of the play available at some time – but I’m not sure I’ll have the extra cash for them, and besides, if they don’t arrive for another week yet, it’ll be old news. The way our life chugs along, we’ll be onto a new adventure before long… Gotta post while the topic’s hot. !

But for now this is the adventure still dancing in our heads, and the songs that the children sang (beautiful rounds and three-part recorder pieces) will be ringing in our ears for a few more days yet… 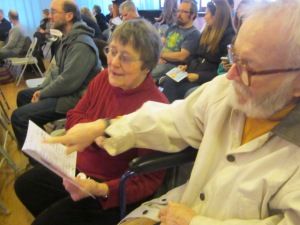 as the audience members read their own individual programs, each one was drawn by the family’s child

Ben (Thor), Sawyer and Elihu before the show

meet Utgartsloki, the King of the Giants 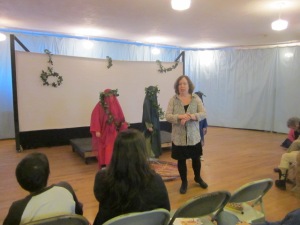 Abigail Reid welcomes everybody and introduces the play

Nora plays the recorder and sets a beautiful mood

the cast, at the end, singing their final song

a happy post-show visit with grandma and grandpa

This was one lovely night we shall never forget.