I need to get Elihu to bed soon – and not sure I’ll last much longer either, so while he sits beside me researching the rearing of triops on my Mac, I sit here on the PC making the quickest update possible. Must say, this day was absolutely fantastic.

With a backdrop of some Earl Hines on the radio we drove to the nursery to admire the flowering trees. Then some modern big band arrangements carried us to the highway, where we then made a foray into some Ornette Coleman. After a bit we turned back the clock to some super-old timey Chick Webb, which finally brought us to our destination: the New York State Police Aviation Hub. Woo hoo!

We were given a private, unrushed tour by a most generous man whose job it was to oversee the repair and maintenance of the state’s fleet. He even let Elihu sit in the pilot’s seat while he powered up the craft (electric dashboard-type systems only) and then guided Elihu through the controls. Wow.

After this visit we drove the long way home and stopped in on a local music store en route where we got Elihu a chain for his cymbal which he’d been wanting for a while. It creates a little sizzling sound – we’d tried to make our own without satisfactory results. Perfect. After a nice chat with the fellow there – who himself was a drummer and maker of drums as well (and who knew of Elihu’s father) we headed north through the driving spring rain.

We landed at the local mall, and enjoyed the closest thing to authentic middle eastern food to be had within a half hour’s drive. Then it was off to the kiosk that sold RC helicopters. Elihu had brought his own – purchased at that same stand – and after some time hanging around demonstrating his skills at handling the toy craft the proprietor was kind to allow Elihu to pilot three different models – including one that was over two feet long! The man was quite impressed with his ability. I was too; just last night he’d given me a turn at the controls and I was unable to keep it level and unmoving. It’s harder than it appears. Looks like I have a young aviator in the house. 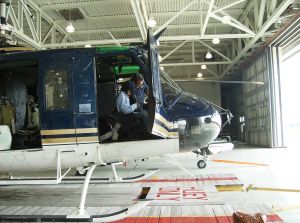 And capping it all off…