We like to spend Sundays at home. I spend the first half of the day cooking large quantities of food thereby lessening the amount of time I need to spend cooking throughout the week. Now that Elihu is bringing his lunch to school it makes even more sense to cook ahead. Some Thai-inspired coconut curry sauce with lots of vegetables, brown rice, baked Greek style chicken, peppery beef and some bow tie pasta. All I need to do is heat it up for future suppers. We always have a bag of arugula on hand for salad. Makes me feel good to have this chore out of the way. I wash the dishes and wipe the counter top and derive a good amount of satisfaction at seeing my kitchen look pristine once again.

Elihu has waited patiently all morning as I chopped, cooked and cleaned. Finally my attention is all his, and we sit in the living room harvesting parts from past airplane projects in order to make something new and improved. We’re puttering about like this when we hear a loud rapping on the kitchen door. It’s our neighbor Zac with his almost two year old daughter, Annabelle. It’s a good thing it’s just them because Elihu and I are still in our pajamas. Last summer Zac and I had pulled an old harrower out of the fallen leaves here in our yard – it had belonged to Ralph, the man who built this place. Ralph had used it on his gardens here, and it lay where he last unhooked it from the tractor so many decades ago. It was still perfectly good, so Zac took it back to his place, fixed it up and returned a few days later to till our garden with it. I was especially pleased that Ralph’s old harrower was enjoying a second life. Today it enjoys a third incarnation.

Zac and his dad are tinkerers, fixers, assemblers of parts, solvers of problems. And they’re so damned laid back about it too. I’m in awe. Today Zac has come over to show us how he’s re-purposed a few of the tines from Ralph’s old harrower. He’s used them as springs for the seat on his 1925 model T. As the tires are the original rubber on wooden wheels, the bounce of the seat’s new-made suspension system really helps cushion the ride. Zac cranks the handle on the front of the engine and fires it up. It sounds just like you’d think, sputtering and coughing as it revs up to speed. Elihu hops on and Zac gives him a ride down the driveway and back through the old farm road alongside the stone wall.

Once again, I feel so lucky to be here, now. 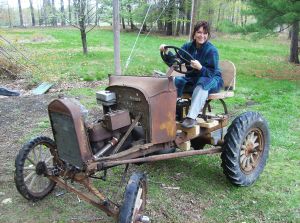 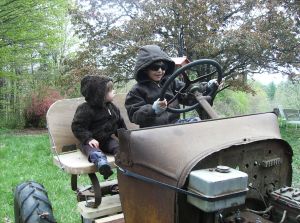 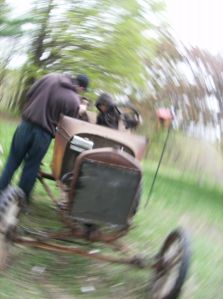 One thought on “Model T Visit”