Finally got my pantry back again today. Elihu finally gave his belated birthday gifts to Uncle Andrew, Mom and Martha today, plus he Skyped with his sister in England and played some string bass for her as a birthday offering too. Those were all good, winning things. But I suppose the biggest win of all was that of the New England Patriots over the Seattle Seahawks at the 49th Super Bowl.

My kid’s never watched football before tonight, and the whole culture of sports in general has always been something of a mystery to him. (As an achromat, visually tracking a ball is nearly impossible in real life.) He’s wanted to learn more about football in particular these days, as it’s often a topic of conversation among the kids at school. How perfect that we joined the game at the end of the first half, in time to witness two very cool plays – plus of course the half-time spectacle (the Katy Perry medley to which he knew all the words… I mean come on mom, everyone sings this stuff in school…) A winning end to a pretty good day. More adventures (and much more snow too, I hear) to follow… 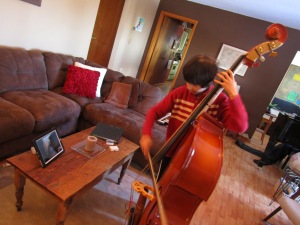 Playing bass for sister Brigitta, who lives in England. It’s her 12th birthday. 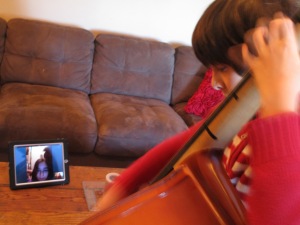 I dash across the road to get neighbor Zac’s help with some cleats I need for my new pantry shelves. Between Zac and his dad Phil they’ve got every type of saw one could ever need. Or so it seems to me. I’m sure Zac could point out the deficiency in their collection if pressed… 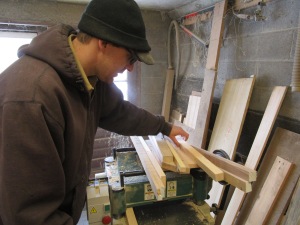 Hmm, let’s see, there’s ripping, mitering, planing, chopping, jigging (is that a word?) and then plain sawing. I think. Might all of it be correctly called ‘sawing’? Who knows? All I know is that one better watch the fingers. !!

See what I mean?

Back home, lil man picks up the camera and does a little editorializing on my home improvements.

Why did I wait til my 50th to buy myself a nice drill? Friends, don’t wait. If you don’t have an 18 volt cordless drill (preferably with a light at the end, unlike my old-fashioned model) then go out and get one. Today.

He catches me measuring twice, drilling once.

A few minutes later! Hoo-ray!! Thanks to pregnant Stephanie for lending me her handy husband to make these cleats for us – and they’re made from trees harvested from their property too. ! Last night we ate locally grown venison, today we’re using locally grown wood to hold up our shelves. Virtually living off the land, we are. !!

And a few minutes even later! Woo hoo! Been without a pantry for going on three months. Ahh. Life really is about the simple things.

And speaking of simple things, we’re off to the farm now, where Elihu plays for Martha her very favorite song, Simple Gifts, on his new alto recorder. (Her birthday is in July, so this gift is either very late or very early.) 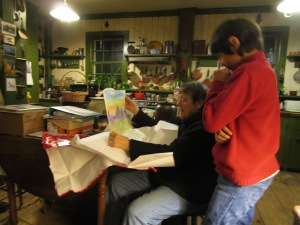 Elihu presents grandma with a pastel of a landscape. I mistook it for recycling afterwards and folded it – after weeks of delicate handling. I could weep. Thankfully, Elihu and grandma were upbeat about pressing it flat again under some glass. Argh.)

Elihu gives Uncle Andrew a high quality, entry-level rc helicopter with money he’s been saving. He’s been wanting to see his very depressed uncle happy for ages and put a lot of thought into the perfect gift. (Andrew’s birthday was on New Year’s Eve.) I myself can’t remember the last time I saw my brother smile. Success!

Seems a bit unfair that the ladies here seated are tipping back their bourbons in the presence of a not-so-dry alcoholic who’s trying his best to maintain. Ah well. Such is the ever-present dysfunction and denial of my family.

I’ve known this kitchen since I was tiny. It’s more cluttered, yes, but it’s still just as familiar. It still really does feel in my heart like the true epicenter of my life. Always has – no matter where I’ve lived or traveled, this kitchen ultimately feels like true center. Where everything begins and then one day returns.

I was ready for bed after our visit to the farm, but the game was too compelling.

Gotta turn off the kitchen lights – even after adjusting the tv’s brightness levels, it’s still too much light. He takes it in stride, but I’m always mildly saddened by the light-sensitive state in which Elihu lives. Wish it were easier for him.

Holy crap! This game is getting intense!! 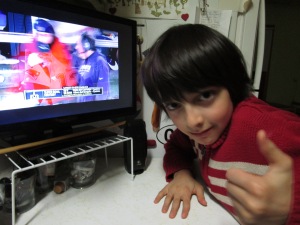 The Patriots are down by four and I don’t think they can possibly win any longer, but lil man still does. 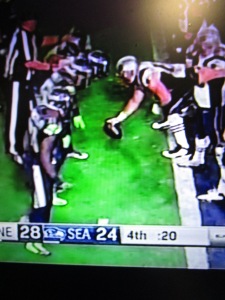 I was wrong – things turned! It’s pretty much a done deal here, but nonetheless, here we go… 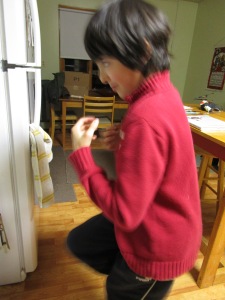 One happy dance for a winning day well-ended, and then it’s off to bed…

Post Script: Another win: Snow day! Letting the lil man sleep in, and gonna get into bed with a book within minutes… Score!