We’ve had another full week here at the Hillhouse. It’s been relentlessly snowy too, and that’s getting to be a bit tiresome for us. But then it’s tiresome for all of us in snowy territory. At our place in particular the garbage piles up outside our door as roadside bins become covered in great mounds, recycling goes out the window as bottles, cans and paper get tossed along with the trash, and lazy folks like me can just forget about composting altogether. Every last bit of refuse simply gets put in one common bag and tossed on the heap to be dealt with weeks hence when the many feet of snow finally melt towards the end of March. It’s usually about then that Elihu begins to sink into the despair of a never-ending winter, and that’s the time I have to remind us both that by his birthday – April 28th – no evidence of winter will remain. (So far, that’s never been wrong. But hey, never say never. !)

Knowing the snow will be gone in two and a half month’s time helps to keep us sane. Keeping busy, watching birds from our kitchen window, flying rc helicopters and snuggling up on the couch with some good books are the other staples that help us to keep it together as we wait out the long, cold season. There’s also plenty of time to practice our music, and that’s a big bonus of indoor living that I’m always grateful for.

But while it’s fun to hunker down inside and get cozy, I can’t help but feel that getting out in the weather, aside from just an afternoon of sledding, might be good for us. There are two hitches to that goal: one, it’s terribly bright outside and that can discourage Elihu from wanting to go out. I totally get that. Yeah, he could probably use both his contacts and his glasses, and that would offer relief, but at the end of the day he’s still a kid and as such doesn’t really have the patience for the contacts. So for him, mostly he’d rather just stay inside.

The other sticking point is the depth of the snow. I’d like to walk out in the woods to check the loggers’ progress, but I’m not sure it’s possible to walk back there without snowshoes. The snow’s up to my knees already, and with more coming, the going won’t get any easier. So that will likely be the next adventure. (I’m on the lookout for used ones, but ’tis the season. So far I haven’t found any good deals. I must remember to look for snowshoes in the garage sales of July.)

Here are some snowy snapshots from our past week…

The Hillhouse property looks so beautiful by morning’s light.

At the right you can see our garbage pile. Kind of. Hard to believe under all this there’s a pond and a garden, just waiting for Spring…

Things are moving along at the Studio. Snow doesn’t affect these hardy mountain men in the least.

They’re even ready to work at night. !

I’ve been underfoot so much on the job site that the forester got Elihu and me our own safety vests. It was very kind of him – and a very good idea too.

We’re at mom’s house here, which is a couple hundred feet away from the Studio. Here’s the view from her kitchen window. While we ate one of her corn-fed deer last week (roadkill that our neighbor promptly butchered and put in his freezer), she has all but one of her regular flock of turkeys visiting now. She would know; she counts em daily. If that missing bird had ended up on the side of the road, we mighta had turkey for dinner too.

They came so close to becoming our national bird. Goofy birds, but gorgeous plumage.

I’ve cancelled my cable tv (again) in order to save some money. Realizing that the cable person still needs to physically shut off the service at the top of the pole (which would involve carrying a ladder thru very deep drifts), I hope to dissuade the fellow/gal from following through. Never hurts to ask, right?

Back inside we enjoy a quartet of Blue Jays at our feeder.

The colors continue inside with our blooming Amaryllis.

Breakfast on a snowy winter’s day. 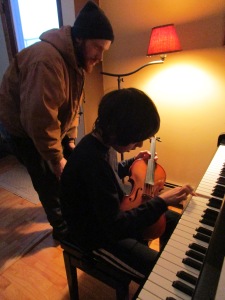 Later on our friend Larry stopped by with his fiddle and banjo – he’s going to park them here for a bit while he finds a new place to live. A great deal for us! If you leave Elihu in a room with an instrument long enough, he’ll figure it out. 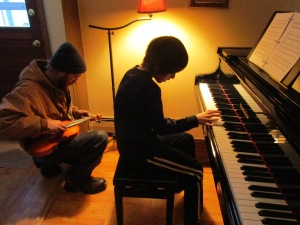 They get it all tuned up. 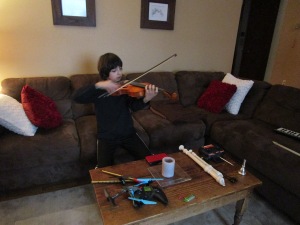 At first it doesn’t sound too promising…

…but what a few minutes and a little rosin can do! Elihu sounds pretty good. 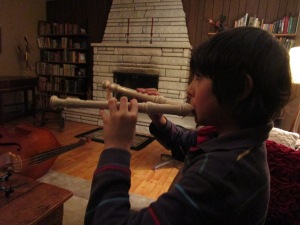 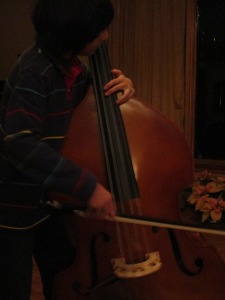 But in the end, it’s really all about the bass… 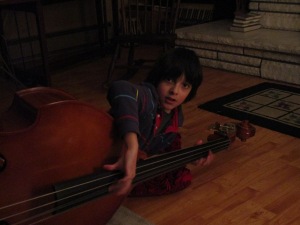 … and clever new ways to approach the instrument. This is Elihu’s “sleeping man’s technique for lazy players”… Just lie down beside the instrument and play as usual. ! 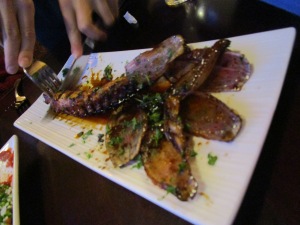 And now for something completely different… Mom has taken us out to dinner. We’re at Istanblue, the local Turkish place. This is the octopus we ‘discovered’ a month or two back. It blew mom away – she concurred, it was the best she’d ever had.

We thoroughly enjoyed ourselves.

I’m having Iskander (in the foreground). It’s essentially gyros meat on top of a bread stuffing topped with a tomato and yogurt sauce. Pure heaven.

If it weren’t for selfies there’d be no pics of the three of us.

And now, to the theater. We’re at the local middle school’s production of Mary Poppins. Amanda Leske, the gal playing Miss Poppins, was off-the-chain good, from her snappy portrayal of Miss P to her vibrant, in-tune singing. Her talent must be in part due to genetics; her dad’s an award-winning banjo player in town.

The gal in the yellow was in Elihu’s kindergarten and first grade classes. Amazing to see her so grown up. Janie did a fantastic job of playing her character, also named Jane. I had to include this pic because the girl in blue is Alex, a one-time piano student of mine and friend from down the road. Her parents are both Chicagoland ‘expats’ like me. (We share a love of food the likes of which cannot be found here in upstate New York. !)

More amazing still were the aerial feats of the production. Here, Mary Poppins takes flight after her job in the Banks’ household is done. A fitting end to a lovely night for my little aviator and me.

One thought on “Long Winter’s Haul”