My mother and father were married in the Church of the Holy Trinity on Manhattan’s Upper East Side, fifty-four years ago this afternoon, on the 10th day of October, 1959. Some folks from the wedding party are still with us, others are long gone. Life sure does look different over a half century later. The church itself is likely the least changed of the whole affair. How much has come and gone since then – so many stories, happy and tragic, that have followed. So many of life’s adventures that could never have been imagined on the happy October afternoon, fifty-four years ago today. Today we told grandma and grandpa that we loved them and were grateful for their union, for without it, we wouldn’t be here today to thank em. !

At home, Elihu pens an original anniversary card to grandma and grandpa

And then shares it with them both 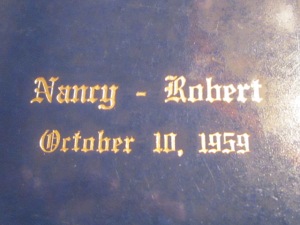 We pull out the wedding album – compiled by the tony Bacharach Studios of New York.

The Church of the Holy Trinity on 88th in NYC, likely looking much the same today as it did back then.

Grandpa lingers over their wedding photo. He remembered that their friend, Adele Addison, had sung for the service that day. Amazing what’s remembered, and what’s not. 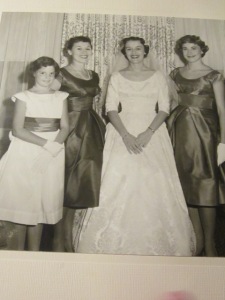 The ladies in the bridal party…

They receive a telegram as they enter their waiting taxi (post-party at the Harvard Club) from the Seagles of the Seagle Music Colony in upstate Schroon Lake, NY, who have congratulated Nancy on having ‘Baroquen’ Bob of his bachelor ways.  (Dad is a baroque harpsichordist.)  After having this classy candid shot taken, the elegant couple heads off into the New York City night as husband and wife, with a world of adventures yet before them. Cats, Kids and Early Music Festivals are still a mere gleam in their eyes tonight…

I awoke Saturday morning, in my own bed, to the internal soundtrack of a searing Steve Lukather guitar solo, floating atop a lush bed of strings and majestic french horns, the music rising, rising, rising, lifting my soul far above the clouds into the expanse of sky… My own personal and deeply subconscious interpretation – albeit embarrassingly corny – of the bliss I felt at being home, at the triumphant conclusion of an epic journey.

I laughed when I realized the music I’d chosen. I laughed because my bed felt so good. I laughed because it felt so good to be home. I laughed because I felt I had more than come home; I had made it. Whatever that meant. And all that it meant. I’d put eight hundred miles on the car, introduced my son to the ocean, met long-lost relatives, visited the first house I’d ever lived in, rediscovered New York City. And made it back home. Not one hen lost in our absence. All was truly well. We’d been successful – and in ways we’d never even dreamed of. I lay in bed, thinking about home. What it was, how it felt, how I now identified it, how important it was to me.

On our trip folks would naturally ask me where I was from – and I was never quick with an answer. Initially my inclination was to say ‘Chicago’, but as that wasn’t quite true, and that answering so would require a little back story, I would hesitatingly offer that I was from “upstate New York”, and feel a little disappointed in my more truthful answer. Being from Chicago seemed to define who I was – what the better part of my life experiences had been to this point – but as things stood right now, I was in fact not from Chicago anymore. I thought of Army brats and how they usually chose to answer that question. “Oh, I grew up all over”. That would be that. But I didn’t grow up all over, and furthermore I was now a country gal and should probably represent myself as such. Throughout my trip I was given many opportunities to get used to the idea that yes, I was indeed from “about three hours north, in the country, just outside of Saratoga Springs.” If my questioner would look at me for more information I might add: “It’s equidistant to Montreal and New York.” And if another beat followed, I might add “I have chickens.” Ok. I could feel a small amount of pride in that I suppose, but as I didn’t feel it completed the picture accurately, mostly I’d close the conversation by saying that “in my last life I was a musician in Chicago”. That seemed to bring it all up to date with the most amount of truth.

When I first opened the door to our house upon returning, I was hit with the scent of our home. This is something I think all travelers notice first after a long journey. The smell that is unique to their home. I can almost recall the particular ways in which my other homes smelled, the emotional memories that those scents retrieved for me, but had no idea what a fresh return would tell me about this particular house. What hit my nostrils first was a slight smell of, well, ‘funk’. The air told me that this was a summer camp in need of a good airing out. It smelled like a house used only seasonally; a slight hint of must, a shadow of damp linoleum… When I told this to my mom, she agreed that she too had noticed that my house had a particular smell. Not even bad really, just kind of different. She’d wondered if after all my improvements (removal of linoleum and shag carpet, new floors and paint) it might not change the scent. But it didn’t. It smells like a 70s house. Must be in the bones. Cuz I clean it, I maintain it, I open the windows and use fans to keep the inside air fresh. “So this is what my house smells like” I thought to myself upon returning. Crazy. Sometimes visitors have told me it reminds them of a cabin… guess this is at the root of it. Ah well, 70s, slightly funky cabin though it may be, it’s home. My own personal epicenter. Didn’t feel it a week ago, but I felt it for sure now.

We hit the ground running on our first day back as we had a wedding to attend – an early one too, the ceremony was at noon. Elihu kept saying that he was excited as it was his “very first wedding”. (Maybe not entirely true – I was sure he’d been to others, but as a very young one he had likely been playing with his Thomas trains while things had been going on.) But for this wedding – of two people who live just down the road from us and whom we’ve grown to love very much these past few years – he would truly be present. When I told him that it this wedding was significant in another way – that they, as women, were only allowed very recently by law to even marry each other at all – he responded that that sounded ‘hard to believe’ and then added that nobody should be allowed to tell you who you can’t marry. Amazing how things have changed. And how deeply pleased I was that in my son’s eyes it wasn’t even an issue in the first place. As the father of one of the women said that day, “We live in interesting times”. Inspiring times, too.

I mention this wedding because it too was a symbol for me of home. As I met guests from different parts of the country, even from different countries, I began to feel a growing certainty of my being from this place, this small country town. The wedding was at the couple’s home which they had decorated with brilliantly colored gerber daisies and hundreds of brightly colored oragami cranes. The place looked simply stunning. The joy, the love, the sense of family was deeply felt by everyone there. I couldn’t think of a better occasion on which to return home. For me the event helped me feel more deeply my own sense of center. My own family lives here, I now have friends here, I now have a new life here – and for my son it’s really the only home he’s ever known.  In some way, both trip and wedding helped confirm for me that this place really is the center of our physical world; this is where we come from.

For the past four years I’ve had a flower on the antenna of my car. It is a subdued green, now weathered and frayed from thousands of miles on the move. I put it there before I left Chicago as a symbol of hope for the future and cheer for my aching, uncertain heart. (It also makes my run-of-the-mill gold Honda CRV much easier to locate in large parking lots.) I’ve many times thought of replacing it with something that might symbolize the future I’m moving into. I’d bought a bright, deep orange artificial gerber daisy months with the intention of affixing it to my antenna, but it never felt the right time. I realize my putting this much thought into such a thing – simply doing such a thing – may seem a bit immature (admitting it here in print makes me doubly self-conscious of that), but strangely, having that flower go before me in the world as I drive about has helped me to feel lighter. As if while all this heavy shit was going on I was still able to convey a certain lightheartedness in the world.

After leaving the party last night well past dark and then getting up this morning to go back over and help with the cleanup, it hit me. I spotted an orange oragami crane on my dashboard, a memento of the wedding. I remembered the colorful gerber daisies, the cheer they gave to the party. Then, in a flash of inspiration, I remembered the flower I’d bought months ago. I ran inside, found it, and with hardly more than one swipe with a knife brought the ratty, old flower down. In minutes the new one was up. I felt somehow refreshed. My whole spirit had been renewed; in the trip, in the wedding of friends, in the discovery of home.

The daisy goes before me in the world letting folks know (at least I hope) that I’m moving through my world with a certain good humor and lightness of heart. And at the very least, the daisy ensures that my home away from home is distinct from all others; I’m never unsure as to which car is mine. And at the end of my travels, the daisy leads me back down the long driveway to the little red chicken coop and the plain white house. I may not have believed it before, but I do now. That little white house in Greenfield Center is where we come from. Just look for the daisy…